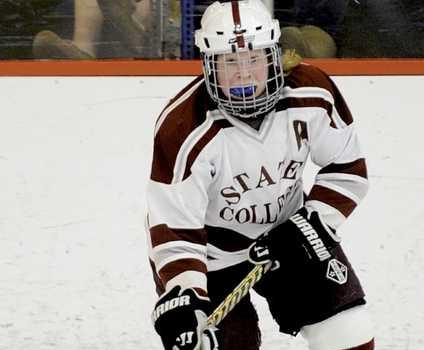 For the sake of staying in touch with the two men's recruits still playing, here's a quick status check:

2013 G Eamon McAdam hasn't played for the Waterloo Black Hawks during their USHL playoff run (he's the no. 2 goalie behind Stephon Williams), but the team is one win away from meeting the Green Bay Gamblers in the Clark Cup finals. Game four of their best-of-five Western Conference final series with Lincoln is Monday night.

Meanwhile, 2012 F Curtis Loik and his Penticton Vees have found themselves in early trouble at the 2012 Royal Bank Cup. The Vees opened with a 2-1 loss to the Soo Thunderbirds on Saturday (Loik had a charging penalty in the game), then fell in overtime to the Humboldt Broncos Sunday night. At 0-2 so far, Penticton will need to win their last two round robin games (Tuesday against the Woodstock Slammers and Wednesday against the Portage Terriers) to make the tournament's semifinals and with a decent seed.

Joe Battista's column wasn't primarily about hockey, but he's always a nice read regardless. Here's one of the hockey parts, just to keep on topic.


April came to a close with the annual American Hockey Coaches Convention and Big Ten Hockey meetings in Naples, Fla. It was the 25th time I have attended the meetings and this one was even more special with our entry into the NCAA beginning next year for our teams.

One of our best players to ever wear a Penn State jersey, Alon Eizenman, was inducted into the ACHA Hall of Fame on Saturday morning. As he gave his outstanding speech about his career and education at Penn State, tears rolled down my cheeks. He was one of many amazing young men I had the privilege to coach at PSU, and his heartfelt words meant the world to me and my wife.

About a month ago, I gave a Darby Kern interview on the very same Pittsburgh Youth Hockey Network first star honors, and said "if only they'd decide to hit Jill Holdcroft next week." Well, it took a couple weeks longer than I had hoped but here it is. Only problem: a picture of any value for replacing her brutal headshot was not included.

For whatever reason, the Greenberg Ice Pavilion was front and center this week. Some guy named Christopher Gammon produced this video, which gets Bill Downey and rink manager Chris Whittemore on camera to essentially say "we're not going to spend much money prepping the rink for NCAA hockey, because there's no point to doing so when we're moving in a year." So why the video? <shrug>

Melting the Ice: Unlocking the Potential of The Greenberg Ice Pavilion
(tumblr.com)

Here's an in-depth look (with quotes!) at the three predominant options for Greenberg: a) demolish it, b) gut it and turn the place into a high-performance training facility and c) take out the ice and put in some sport court. This might just be the sentimental sap in me speaking, but c please.

A first-person account from the Tri-City Storm's war room during their drafting of a 2014 defense commit at the USHL Futures Draft last Tuesday.


The most nerve-wracking moment was when the team drafting ahead of them was making its pick, because they Storm knew who they were going to take. When it became clear the Storm had the player they wanted — Kevin Kerr from Team Comcast U16 — in the first round, there were high fives, cheers and relief.

If you haven't heard yet, Johnstown, PA will be the home of a sparkly-new (well, relocated) franchise in the Tier II Junior A NAHL next season. Very cool. Hopefully someday soon, the legendary barn graced by Reg Dunlop and Ned Braden will be home to a future Penn Stater.

Tumult at North Dakota. I don't hate it.
Posted by Kyle Rossi at 3:02 AM