With a large, talented and successful freshman class last season it shouldn't come as much of a surprise, but the Icers were represented twice on the ACHA's all-rookie team in the form of goaltender P.J. Musico and forward Tommy Olczyk. Another first-year ACHA player, forward Justin Kirchhevel, was given third team ACHA All-American honors.

Olczyk, from Long Grove, IL and the son of former NHL player and coach Ed Olczyk, came to PSU from the USHL's Sioux City Musketeers this season and immediately emerged as a team leader and one of the team's best all-around players. His 24 goals led all Icers, and his four game-winners notably included an early third-period strike to help PSU to a 6-3 ACHA tournament win over Oklahoma in what turned out to be the final Icers win ever.

Musico, an athletic goaltender from Orange, CA, rotated with Matt Madrazo for most of the season, but ended with a spectacular 1.51 goals against average and 0.925 save percentage. He had a pair of shutouts, including a 17-save effort in an 8-0 win over West Virginia on January 20th. He also stopped 22 of 23 in a 5-1 win over eventual national champion Delaware on November 19th, 2011.

Kirchhevel, a Brookings, SD native who transferred from Alaska-Anchorage, was half of a dynamic tandem as one of Olczyk's linemates for most of the season. He led the Icers in assists (37) and points (56), and also impressed defensively and as a lethal penalty killer. Two of his 19 goals game in the last five minutes of the February 4th game against Oklahoma, as PSU rallied from a late 3-0 deficit to win in overtime.

Olczyk, Musico and Kirchhevel will all join Penn State's inaugural NCAA Division I team in the fall.

Additionally, forwards Dominic Morrone and Chris Cerutti, as well as defensemen Dan Petrick, Dan Loucks and Rich O'Brien were named ACHA Academic All-Americans. Academic All-Americans are required to be in their junior or senior year and have a 3.2 cumulative grade point average. O'Brien will join Olczyk, Musico and Kirchhevel as a member of the 2012-2013 Nittany Lions.

This latest batch of award winners joins Lady Icers Lindsay Reihl, Sara Chroman and Lydia Scott, who were named Academic All-Americans on the women's side on April 16th. Morrone was also named to the ACHA all-tournament second team, while senior forwards Kurt Collins and Paul Daley participated in the ACHA Division 1 All-Star Game on March 17th.

Here is the full list of the ACHA Men's Division 1 All-Americans: 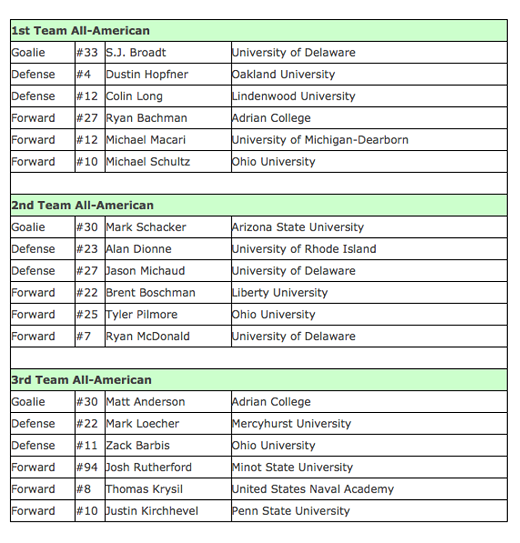