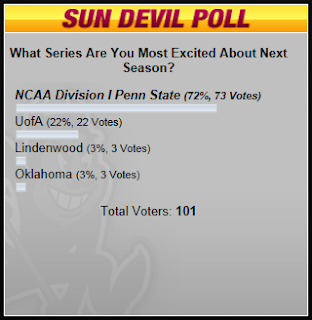 Arizona State will be one of the rumored three ACHA teams to face Penn State's inaugural NCAA men's team this season, according to a poll on the team's website. The Sun Devils join Ohio to make up four of the possible six ACHA dates on the 2012-2013 schedule. Dates and location are not confirmed - really, this poll is all I know about it - but one would assume that the games are likely to be in the Ice Pavilion and during the spring semester when most NCAA Division I teams are locked into their conference schedules.

The TYT schedule page (go there for a full rundown of known games) shows November 2nd-3rd, November 16th-17th, November 30th-December 1st, January 11th-12th, January 18th-19th, February 1st-2nd, February 8th-9th and February 15th-16th as the remaining available weekends. The Ohio Bobcats will fill one of those February weekends, while four other dates will be filled by the U.S. National Team Development Program.

While "slumming it" back in the ACHA probably sounds somewhere south of appealing to fans excited to get on with Penn State's NCAA era, the Sun Devils do boast one of the most talented teams in non-varsity hockey. Last year's version finished 29-4-3 after being upset by Cinderella Oakland - that sounds vaguely familiar - in overtime in the second round of the national tournament. Furthermore, that team only had three seniors on it, and although one of them was star goaltender (and one-time Penn Stater) Mark Schacker, the Devils certainly seem like a team with the best in front of it. Coming into the season, they have to be considered one of the top two or three favorites for the Murdoch Cup.

Furthermore, ASU has already announced four forward recruits for the coming season: Brett Penner, Kyle Bowen, Kory Chisholm and Brian McGinty. McGinty is a transfer from NCAA DI Canisius, where he played nine games over two seasons. Chisholm and Bowen were three-year teammates with the Lloydminster Bobcats of the AJHL, the same league that produced incoming Nittany Lions David Glen and Reed Linaker. Penner comes from the SJHL and the Flin Flon Bombers, the same organization that gave PSU goalie P.J. Musico (the two were teammates in 2010-2011).

In other words, while an ASU win would represent a monumental upset, this is certainly a team capable of pushing back.

The big picture now lays out as Penn State having 27 or 28 known games on the schedule (depending on whether the Robert Morris tournament ends up using one or two), 26 or 27 of which count towards the NCAA's 34-game limit (one NTDP game is exempt). Basically, we're almost there. Oklahoma has been rumored as the third ACHA team, which leaves a handful of games for NCAA DIII teams and hopefully one more DI opponent.
Posted by Kyle Rossi at 3:55 PM