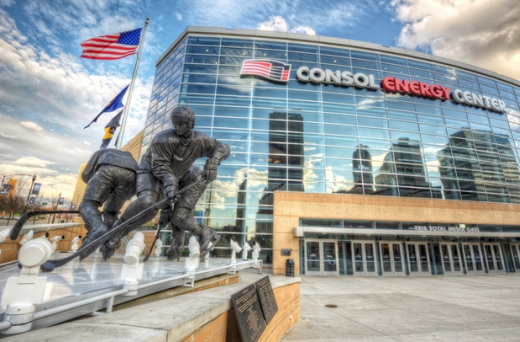 As Penn State moves into Division I, we're going to have to get used to several differences from the ACHA era. There might be a certain loss of intimacy as PSU moves into a larger arena and gains a larger following. The losses per season will no longer be capped around five. But for me, the toughest adjustment might be the fact that the Nittany Lions won't (more or less, despite the drama of 2011) automatically compete in a tournament to determine a national champion at the end of the season.

The coming season, in particular, will be tough in that regard. Not only is the NCAA Tournament off the table, but there won't even be a Big Ten tournament with a theoretical shot at NCAA participation built in. The season will just sort of awkwardly conclude, probably after the late February series at Wisconsin.

PSU seems to have found the next best thing, however: a holiday tournament at Pittsburgh's Consol Energy Center that will feature up-and-coming Robert Morris, future Big Ten rival Ohio State and perennial national power Miami. The long-rumored event has finally been confirmed for December 28th and 29th by Sam Werner of the Pittsburgh Post-Gazette. There's more, though.


The long-term goal for the tournament is to have Robert Morris and Penn State play every year, and bring in different high-caliber teams to round out the field. Schooley said Boston College, the defending NCAA champion, has expressed an interest in playing in the future.

"It's going to be really neat because we're going to have the opportunity to bring in some very high-level teams over the next few years," [RMU coach Derek] Schooley said.

[Consol Energy Center GM Jay] Roberts said Robert Morris has been heavily involved in planning the tournament, and Penn State will take on more from a planning perspective as the program continues to grow.

Is there anything not to love here? From a Penn State perspective, it's a showcase in a vital market, one with a growing talent base, a potentially large fan base, and with the possibility of involving top teams from around the nation. It has a chance to become a staple of Nittany Lion schedules for a long time. And hey, from a Robert Morris perspective, good on them - they're certainly not interested in punching bags to help themselves look good in their home tournament.

If the tournament's participation stabilizes at some point - I'd be thrilled with PSU, RMU, OSU, Miami every single year to be honest - it could even become the Ohio/Pennsylvania version of the Beanpot, the annual Boston-area college tournament that locals and alumni place on a level right next to the NCAA and conference tournaments.

The programs need no introduction. Miami, under Enrico Blasi, has become one of the top five or ten programs in the country in the last decade. Ohio State, despite an up and down history, certainly has name recognition and may finally be hitting their stride as a program (and as Doc Emrick can tell you, they've produced several notable NHLers over the years like Ryan Kesler, Rod Pelley, Dave Steckel and R.J. Umberger). The Colonials...well, you might not be quite as familiar with them (go here if you're not), but believe me when I say that they've proven that they won't be out of their pay grade against some of these programs, despite their newness and conference affiliation.

The Icers had a bit of history - sort of - in the tournament's previous incarnation as a single-day showcase. On January 8, 2010 at the Pittsburgh Hockey Classic, PSU was scheduled to play RMU's ACHA team in between games by the varsity Colonials' men and women. Because of a scoreboard issue at the late Mellon Arena (and a subsequent issue with the crane used to fix the scoreboard), the Icers were squeezed into a two-period exhibition, which they won 3-2. Schooley's troops upset Miami 3-1 that day, and the RMU women (now a CHA rival of the PSU women, of course) opened the event with a 4-2 loss to Connecticut.

On January 3, 2003, before RMU began its program, Penn State played in what was dubbed the Pittsburgh College Hockey Showcase. In a doubleheader event, NCAA programs Ohio State and Princeton tangled (incidentally, Pelley, Umberger and Steckel all recorded points in the 4-1 Buckeye win, although Guy Gadowsky was a year and a half away from showing up at Princeton, in case you were wondering about that) before the Icers thumped Washington & Jefferson in the nightcap.