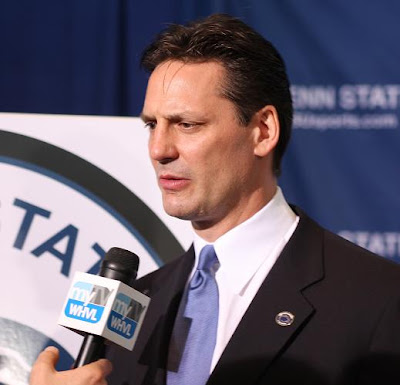 Sara Chroman, Lydia Scott and Lindsay Reihl represent the Lady Icers among the list of 2011-2012 ACHA Women's D1 Academic All-Americans. UMass, by the way, had none. Not that I'm still bitter or anything. But PSU's better at both hockey and academics.

I know this is largely just another collection of quotes from the groundbreaking, arranged differently. Still, there's always room on TYT to give a student writer some support (even if Ms. Johnson probably got more pageviews on her own than TYT gets in a month, but whatever).

I probably don't give Andrew Dzurita enough love in these posts for the simple reason that I don't want to rip off his pictures and get sued. Luckily, a Q-and-A with Guy Gadowsky means I can just rip off someone else's picture. Anyway, here's some of the juicy stuff:


[On the scholarship breakdown] You can’t go out and spend 18 scholarships in one class, that isn’t taking care of the program. We have to gradually move a long, and until we have four full recruiting classes under our belt we won’t be able to see how things are going. It is certainly a process, and when we get to the Big Ten, they certainly are the best college hockey programs in the nation. They have tons of tradition and success that they can draw from and we are the new guys on the block, so it is going to take a couple of years to see where we stack up – but that is part of the fun of it.

We can only release [next year's schedule] when all of the contracts are back, so right now there isn’t anything we can talk about regarding next year’s schedule, and there isn’t a timetable I can give you on when it will be out.

As a reminder, feel free to check this page out for pieces of the schedule revealed by those with looser lips than Gadowsky.

Remember Jessi Hilton? Sure you do. He committed to PSU last summer, then rapidly decommitted when 12 games played with the WHL's Calgary Hitmen interfered with his NCAA eligibility. Fortunately for him, the CIS doesn't care about his time in major junior, so he'll be headed to the University of British Columbia for the coming season. Nice to see that saga have a happy ending.

Since I openly scratched my head at the cost of the arena jumping from $75 million to $89 million at one point, here's something that breaks it down quite nicely. The Pegulas are now in for $102 million, as we know. $89 million of that will pay for the arena, while $13 million will endow scholarships. Additionally, $3.7 million has come in from other donors, headlined by John and Karen Davis as well as Paul and Nancy Silvis. Administration is seeking another $6.3 million in private gifts. There you go.

While it's still not finalized...


Wisconsin and Minnesota, and Notre Dame and Miami, will play in doubleheader outdoor games next season, according to the Wisconsin State Journal. The games would be played at Soldier Field in Chicago on Sunday, Feb. 17, 2013.

To quote Joe Battista, "we want to play in that game."

The contentious dismissal of Paul Kelly seems to have led to changes in the way CHI is run, although no changes in mission or direction are expected.
Posted by Kyle Rossi at 5:11 PM