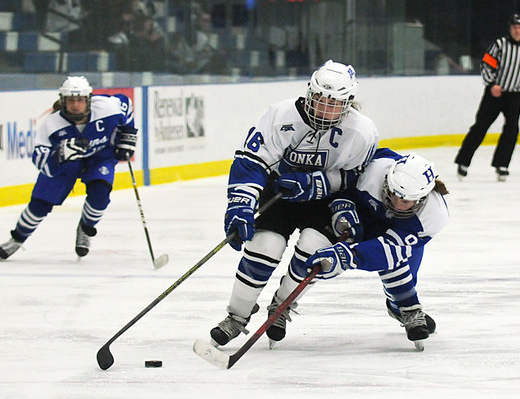 For the second time in a row, a Penn State commitment has been announced by a friend of the player on Twitter. This time, 2013 forward Amy Petersen shared the 2013 pledge of Laura Bowman, her linemate with the Minnetonka (MN) High School Skippers.

Minnetonka, as you may remember from Petersen's introductory post, is the 2011 and 2012 Minnesota Class AA state champs. Those 31 goals and 52 points led all Skippers this past season, and as you can tell from the above picture, Bowman also led the team in a different sense as captain. So in 2013, between Bowman and Petersen, Penn State will have the top two scorers from last year's big-school state high school champs from the self-proclaimed "State of Hockey," one the team's captain, the other an alternate captain. Not too shabby.

Here's a little bit of Bowman (No. 16 in white) and Petersen (No. 9 in white) in action from the state final against Roseville, where the pair combined for four points in a 3-0 win. Hopefully she doesn't get mad at me for pointing this out (you'll see why if you watch the video), but incoming defender Paige Jahnke is No. 17 in black.

Bowman's 52 points were hardly cosmetic either, as she recorded nine in Minnetonka's six games through the regional and state tournaments. She recorded at least one in 24 of the Skippers' 31 total games, including a pair of hat tricks, and was named an honorable mention to the AP's All-Minnesota team.

The 2012 title, as mentioned, was the second in a row for the pair. In 2010-2011, Minnetonka ran show on the state to the tune of 29-1-1 and a championship game win over Edina. While Bowman and Petersen were vital to that team as well (in fact, Bowman assisted Petersen on the championship-winning goal), it was a senior-laden outfit, with the team's starting goalie and three of its top five scorers - the ones that weren't Bowman or Petersen - all in their final year. This past season definitively proved that the dynamic duo could play centerpiece on the best team in the state.

Earlier this year, Bowman gave Twin Cities TV station KARE a little bit of a scouting report on herself:


"I'm fast. I'm definitely not strong, but I'm fast and I see the ice very well. One of my main strengths is that I've been playing on a line with Amy Petersen for practically my whole life and we play really good together, and that's one of the reasons that we've achieved so much in the last couple of years."

Incidentally, that link also has video of Petersen feeding Bowman for a pretty goal. That's a common thread with the two pretty much anywhere you look: long-time linemates with the type of chemistry that comes from playing together since forever, the distributor and the finisher. It's a combination that should serve Josh Brandwene well. Another thing that will undoubtedly appeal to Brandwene is Bowman's hockey and classroom smarts.


“She’s a really smart hockey player, on the ice and off the ice,” said Minnetonka head coach Eric Johnson of Bowman. “She’s a 4.0 student, a very good student. And kind of translates her smarts to the game. I think she’s a student of the game. She’s very good at taking face-offs as a center. She kind of figures out how to beat the opponent."

Bowman has a high percentage around the net, and she knows where to go and rarely skates past the net, according to her coach.

"She also gets a lot of nice goals as well on the rush or breakaways," Johnson said. "She just has a knack for finding the back of the net.”