The star defense recruit, who struggled with injuries all season, has finally been cleared to play. Juha's last game action was November 13, 2011 at the World Jr. A Challenge and his last contest with the BCHL's Vernon Vipers was on October 28th, so this qualifies as both fantastic and long-awaited news.

To be honest, I'm kind of sick of hearing about the Coaches Caravan. But we're in the last week of it, highlighted by the entry of Guy Gadowsky and Josh Brandwene, so now-ish would probably be a decent time to register if you haven't already and want to attend (except the Altoona one, you probably missed that by the time you read this). Tickets for Nittany Lion Club and alumni association members are $40, non-members are $55. Here's the schedule. Get at me if you'll be in Cleveland.

Gadowsky will attend all six of those stops, while Brandwene will only be in Pittsburgh and Buffalo.

1. Help the kids of Rwanda
(gofundme.com)


My friend Katelyn and I are taking a mission trip to Rwanda, Africa on May 23rd! We picked Rwanda because it is an extremely poor country that could really use our help. With the genocide just over 15 years ago, these people are looking to rebuild their lives. Any small donation can make a huge difference. In our case, the money raised is going to the funding of a school in which we will be working at while we are there. Thanks so much to all of you for your support!

While I'm sure Ms. Vakiener is an outstanding lacrosse player, I'm more concerned with the sidebar on this one, titled "RIT HOCKEY Arena Update."


More than $8 million in private donations have been secured for RIT’s Gene Polisseni Center, which has an estimated total cost of $30 million to $35 million. The school wants to raise $15 million through fundraising and will pay off the remainder of construction costs through revenue generated from the venue, [RIT director of university news Paul] Stella said.

There is no official date for ground-breaking, though speculation is that it may take place during Brick City Weekend, RIT’s homecoming event Oct. 19-21. The Tigers men’s hockey team plays Penn State at Blue Cross Arena at the Rochester Community War Memorial on Oct. 20.

Heeeey...that's us! By the way, RIT plans to open their arena during the same 2013-2014 season as the PIA. They just now selected an architect, Canadian firm BBB Architects. Better get cracking, guys.

Ever wonder why a program like Michigan State would schedule a first-year program when a) they don't have to, since the Big Ten doesn't start until 2013-2014 and b) they get no credit in the pairwise rankings for doing so? Wonder no more.


I believe that while we are always trying to do what's in the best interest of Michigan State, when you're at a school like ours, we also need to play a leadership role in helping our sport grow. Regardless of the impact of games with PSU next season on our PWR, we believe its the right thing to do...both for the good of the sport, as well as to help a new hockey-playing member of the Big Ten.

The entire chat is worth a read for Anastos' thoughts on the Big Ten, not to mention the interesting tidbits on a future opponent.

I'm thinking when Penn State and Michigan State get together this season, there should be a game beforehand for the hockey dads from the two teams. We already had 1984 Olympic teammates Chris Chelios (MSU's Dean and Jake), David Jensen (PSU's Nate) and Ed Olczyk (PSU's Tommy) in the mix. Now toss in Peter Bondra, who didn't play for Team USA but who did score 503 goals in the NHL. 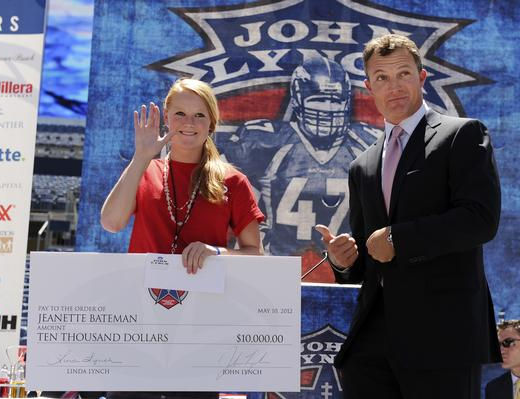 From the "for what it's worth" department. I don't know Mr. Ross other than through his getting pinged by my network of Google Alerts. His StalkerNet entry lists him as a Systems Administrator in the PSU registrar's office.


Just came out of a presentation on the new Pegula Ice Rink at PSU. That facility is going to be pretty amazing. I'm not even a huge hockey fan like +Bradley Snyder is, but I'm excited to go to games.

Looks like Tim Hortons is 99% confirmed to be the facilities food vendor. (He said don't tweet that. I didn't. This is G+.)


Tickets are dirt cheap too 8 bucks. If you want high roller tickets that includes club access and an included meal its only 45 bucks. Would be a nice evening.

Anyone have a problem with $8 tickets? Didn't think so.

UB-to-DI was a hot rumor a while back, but now it has been reduced to "this would be a great hockey school, and we should do it ASAP...now who's got some money?" columns. I think Penn State spent about 30 years in that phase, so don't hold your breath. Although, it would be a good idea for Buffalo to act now, because...

Hockey East, now at ten members, is adding Notre Dame from the dissolving CCHA in 2013-2014. UConn, on the other hand, would leave a still-in-existence conference behind, Atlantic Hockey. AHA would be down to 11 members, and is a perfect geographic and competitive fit for a new program at Buffalo. Everyone wins. Well, except Alabama-Huntsville, but that's a whole 'nother thing. 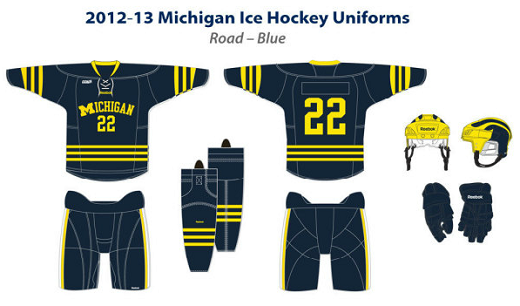 If not for Michigan's tendency to tweak their unis (seemingly) every year, I'd say that this is what the Wolverines will look like the first time they play Penn State. Regardless, I love these. I already felt like UM's whites were one of the best jerseys in college hockey, and now they have blues to match, along with the addition of the Big Chill throwbacks to the regular set.

Niagara's no longer in the game
(Buffalo News)

Two Buffalo News articles in one Three Stars, neither of which really has anything to do with Terry Pegula? Sure. This one's the definitive word on the demise of the Niagara women's program, as far as I'm concerned.

Zzzzz...suffice it to say that I wouldn't include this story in a January Three Stars post.
Posted by Kyle Rossi at 2:03 AM