Earlier this month, the Tier II Junior A NAHL's Alaska Avalanche were acquired by Johnstown, PA interests and relocated to the city of Slap Shot fame and the Cambria County War Memorial Arena, which was vacated by the ECHL's Johnstown Chiefs in 2010. Since then, the organization has more or less done everything right, starting with a nickname of obvious origin: Tomahawks. Their logo, which looks like the love child of the Chicago Blackhawks' and Univeristy of North Dakota's insignia (former, in UND's case), is also quite sharp. 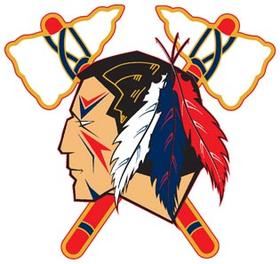 The red, white and blue color scheme, in a classy touch, is designed to honor the same veterans who are also honored by the name of the team's home arena.

The Tomahawks have hired a coach, Jason Spence, whose ten-season professional career was spent mostly with the Chiefs. In 2009, he moved behind the bench as an assistant coach, following the team when it relocated to Greenville, SC. After a brutal 2009-2010 season in Johnstown, the Greenville Road Warriors have gone 87-47-10 in their two seasons of existence. Spence, from what I've read on him, is well liked locally. At the very least Rick Boyd, a former Chiefs teammate and now his boss as GM, is a fan.


"Jason was the hardest-working player on the ice and a wonderful team ambassador off the ice. The fans loved him and he connected with this community so well that he relocated to Johnstown, married a local woman and made huge sacrifices to pursue his love of coaching and mentoring young players," Boyd said. "I know our young men will be thrilled to have Jason as their coach."

The Tomahawks will inherit the bulk of their roster from Alaska, which went 35-19-6 last season before bowing out in the first round of the playoffs.


Hall of Fame Steelers linebacker Jack Ham has invested in the ownership group of the Johnstown Tomahawks, the new NAHL Tier II Junior A hockey team, according to a radio interview given by majority owner James Bouchard and confirmed by team President Richard Bouchard.

James Bouchard said during a radio interview that Ham and former Buffalo Bills star linebacker Shane Conlan have invested in the ownership group.

Both Ham (who was at PSU from 1968-1970) and Conlan (1982-1986) are, of course, integral parts of Penn State's Linebacker U legacy and are generally considered among the top five LBs ever at the school. Combined, the pair were on three perfect teams. Conlan was on the 1982 and 1986 national champions, although he redshirted in 1982. Today, Ham is an analyst on the radio broadcasts of Penn State football games.

Even beyond that, there's reason to be excited from a hockey perspective. It's a natural opportunity for a recruiting pipeline in Penn State's backyard. For both the coaching staff and for us garden-variety obsessed fans, it's an opportunity to see PSU recruits - either potential or actual - in person, either as Tomahawks or as their opponents. Before now, the nearest NAHL franchise to State College was in Jamestown, NY. The nearest outpost of the Tier I USHL is in Youngstown, OH. Both leagues, the top two junior leagues in the U.S., are based mostly in the central parts of the country.

Bryce Johnson, Justin Kirchhevel, P.J. Musico, Jake Friedman, Joe Lordo and George Saad are members of Penn State's 2012-2013 roster who have spent time in the NAHL. In 2011-2012, the then-five Big Ten programs rostered 15 players who had an NAHL franchise listed under "last team," headed by Ohio State's five (this, of course, doesn't include those who played in the NAHL before advancing to the USHL or elsewhere).

Hopefully someday soon, "Johnstown Tomahawks" will be spotted under that "last team" column on a Penn State roster. But even if that doesn't happen, these are certainly exciting developments for that growing hockey state - yeah, I'm daring to use that label -of Pennsylvania.
Posted by Kyle Rossi at 12:08 PM