On the Coaches Caravan, the Healing Process, and the Light at the End of the Tunnel 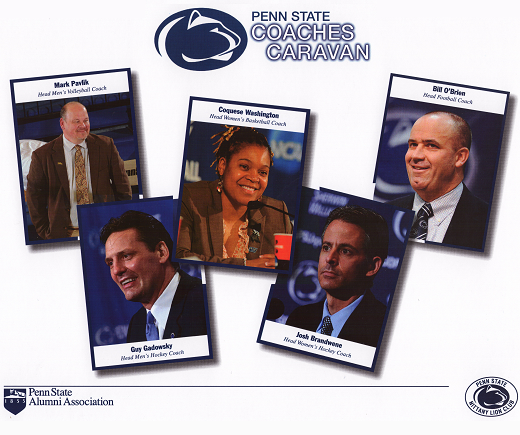 Over the last two years that I've been doing this blog, "Kyle Rossi, hockey blogger" has more or less curb stomped "Kyle Rossi, hockey fan" and left him for dead. What I mean by that, of course, is that there has not been a single Penn State hockey event in quite a while where I've shut down the TYT half of my brain and simply enjoyed it without thinking about how to address it on here. Even at the alumni banquet in February, where I intended to do precisely that, I ended up tweeting quotes from speakers and taking pictures that led to this post and this post.

I once again tried to take that route with the Penn State Coaches Caravan stop in Cleveland, my hometown, Tuesday evening. So naturally, here I am, posting about it. Old habits die hard.

To be fair to myself, I didn't seek access to the media sessions that have preceded each event. I didn't storm in and pepper Guy Gadowsky with serious, but tired, questions about expectations for the coming season. I did talk to him about things like his cell phone and assistant coach Keith Fisher's recent wedding in Punta Cana for a while, took a couple pictures, enjoyed some chardonnay and something that I think was orzo salad, and watched excellent presentations from four of Penn State's varsity coaches, Gadowsky, Mark Pavlik (men's volleyball), Coquese Washington (women's basketball) and Bill O'Brien (football). That's what fans do, right? I forget.

Anyway, yes, I'm still posting. What follows may read more as a catharsis than as a blog post, though.

Admittedly, I'm not huge on these types of events as a general rule. They're designed to generate largely vapid, yet fluffy and positive media content. The rather obvious mission of this particular three-week operation: generate said content on new football coach O'Brien, while selling him to a wide base of PSU alumni and boosters at the same time. Gadowsky called himself an "opening act" to me, and in a conversation with the Nittany Lion Club's John Nitardy during the cocktail hour preceding the event proper, he referred to "Coach" several times while relating anecdotes from the tour before I stopped internally asking "which one?"

In that regard, it's been a success. The media coverage has been as expected, and O'Brien presents extremely well. After watching him, I sincerely believe that he's the right person at the right time for the job. I'll leave it to people much more familiar with his resume and tenure to date for the full analysis, but he strikes me an intelligent man who, while aware of the monumental task ahead, remains willfully ignorant to a point. He tells his players to "block out the noise," and seems to do the same himself. The heaviest moment of the event, arguably, was when O'Brien seemed to become almost forceful and defiant in talking about his desire to continue Joe Paterno's legacy of athletic and academic excellence.

But as a hockey-first person, tweets from previous stops like "Gadowsky tells the #psucaravan crowd that he's honored to be a part of Nittany Nation," combined with numerous articles including verbiage like "Men's hockey coach Guy Gadowsky, women's hockey coach Josh Brandwene and men's volleyball coach Mark Pavlik also spoke to the crowd" kept my expectations for the puck portion of the show pretty low.


And no, Gadowsky didn't tell us about any of the unknowns in this year's schedule (his confirmation of PSU's participation in the Pittsburgh College Hockey Tournament in December and expression of a desire to play at Beaver Stadium will probably stand as the only newsworthy hockey tidbits from the tour). The easy highlight of his time at the mic in Cleveland was his story about the recruitment of incoming forward Kenny Brooks in Las Vegas. He spotted a pair of blue and white-clad individuals on the strip and offered a hesitant "we are...?" without really knowing what to expect. Gadowsky then stepped to the side of the podium and acted out the emphatic "PENN STATE!!" he received in reply, which drew laughs, then numerous joking references to "recruiting" in Vegas from the other coaches throughout the remainder of the stop.

Gadowsky even jumped back in later, during the Q-and-A that followed the four presentations, with a (paraphrasing) "No, really! His name's Kenny Brooks, he'll be on our roster this season, and he's from Las Vegas!"

So maybe information-starved hockey bloggers weren't the target audience. However, Gadowsky did a fantastic job selling himself and the program to roughly 170 people who were there mostly for O'Brien and who may have only had a passing awareness of Penn State hockey.

Then again, maybe this information-starved hockey blogger was part of the target audience.

See, there's a hard truth out there, and please allow me to apologize in advance for bringing this up, but the reality is that many of us have not recovered from the events of this past November. The issue goes much deeper than the alleged behavior of Jerry Sandusky, the alleged inaction of Tim Curley and Gary Schultz or even the deplorable and continuing behavior of the Board of Trustees (yes, you too, Dave Joyner). It also goes deeper than my personal belief that, if the charges against Sandusky, Curley and Schultz are true, surely several others at the top of the university hierarchy, many of whom remain in their prestigious positions today, also knew of Sandusky's transgressions.

For myself, last November was about the shattering of an entire value system. As Penn Staters, we believed that our school - including each of its faculty and staff members, students and alumni - was, on some fundamental level, better than every other institution out there. Maybe Alabama wins more football championships, maybe MIT has a better engineering school, maybe Arizona State parties harder, maybe BYU parties less, maybe Virginia has a prettier campus, maybe Northwestern has a higher athletics graduation rate and so on, but roll everything together and Penn State has no peer. Even during what qualified as the worst of times before November, Penn Staters could always be secure in the idea that we were still different than everyone else. Somehow more ethical. Simply better. We lived with those beliefs for a few years or a few decades - depending on age - and in one week, it was all destroyed.

Yeah, okay, 99.99 percent of Penn Staters had nothing to do with what happened, and for many of you, that fact alone is sufficient to carry on with business as usual. But I've struggled to get past the idea that the failure of leadership within the Board of Trustees poisons everything underneath. At the very least, much like the hot girl who turns into a five when you wake up sober, PSU looked a lot like every other large research university with a large athletic program. It was no longer on its pedestal, no longer special, no longer better, it just happened to be the one I attended. And so what? I only went there because my father did, and because I grew up with Joe Paterno's Penn State football program as a result. And...well...

I seriously considered quitting this blog (even to the point of tweeting the notion the night Paterno was fired, but saying that I would sleep on it) because, quite simply, I wanted nothing to do with the school in the immediate aftermath of those events. I was disgusted by the allegations, and disgusted by a lot of what transpired since news of the allegations broke. To this day, my involvement with PSU is more or less strictly limited to hockey, thanks to TYT and my personal ties to the program. Gadowsky hasn't hurt things either. I have no reservations saying that I would not have been at the Coaches Caravan if not for his presence, and after talking to him once again, I continue to have no doubt that he'll build a program that will be the envy of everyone in the Big Ten and in the country - just be patient, because there's going to be some dirty ice for a couple years.

Outside of hockey though, I've flipped the switch off. I haven't watched a single non-hockey sporting event since Paterno's 409th and final win. I haven't even been on campus other than for hockey reasons (I have to be the only person who attended the Pegula Ice Arena groundbreaking, then blew town before the Blue-White Game). I'm torn as to continuing my membership in the Nittany Lion Club. The idea of tacitly approving of PSU's leadership through my annual donation still makes my skin crawl. I'm really sorry if that rubs any of you the wrong way, but that's how I feel right now.

And that's precisely why the Coaches Caravan is so much more than a factory for positive press.

Penn Staters, generally, are at different stages of the healing process. Based on the excitement I've seen for O'Brien, both on Tuesday night and otherwise, I suspect most are much further along than myself. For my part, I left the event feeling pretty good about Penn State, and not just Penn State hockey, for the first time since November.


There's Gadowsky and O'Brien, of course. There's also the self-effacing Pavlik and Washington, whose heartfelt declaration that State College is her home (while explaining why she turned down a recent offer from Michigan, a school near her native Flint) drew enthusiastic applause. Underneath the PowerPoints, the give and take, the corny jokes and the more sincere moments, one thing is more than evident: these people are deserving of support. They're honorable people, they believe in the university, and it turns out that they're not horrible at coaching either. My realization that hey, you can like someone and believe in their cause without liking their boss, might prove a step towards a day where I wear my blue and white just as fervently as I did six months ago. A day when I'm once again secure in knowing that my alma mater is just better than yours.

That day, unfortunately, isn't today, but the idea that the day may yet pass was unfathomable eight hours ago. Now, thanks to the Coaches Caravan, that's no longer the case. I hope that those responsible for organizing the tour read this and accept my sincerest appreciation.
Posted by Kyle Rossi at 12:59 AM