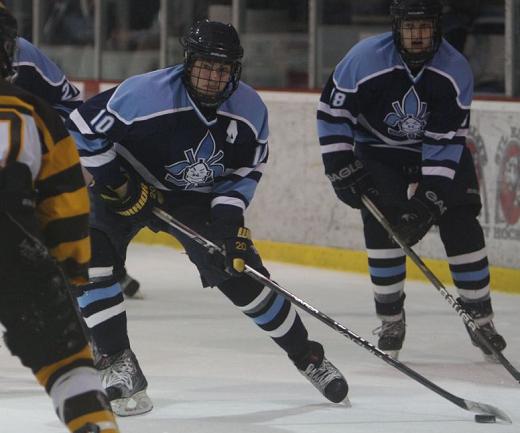 As first reported by none other than 2013 forward David Goodwin, forward Chase Berger, his "good friend," has joined Penn State's recruiting class of 2015. He's the second to commit for that year, after New Jersey's Alec Marsh did so in March.

That Goodwin broke the news is hardly a surprise. Berger is from St. Louis and spent the last two seasons playing midget major for the St. Louis Amateur Blues, the same team Goodwin called home from 2008-2010. 2012 defenseman Joe Lordo, still another St. Louis native, is also a former Blue. Goodwin, of course, plays for the USHL's Sioux City Musketeers and was teammates with 2012 goaltender Matt Skoff this past season. A former Muskie, PSU sophomore forward Tommy Olczyk, also played with Skoff.

There you go: Berger to a current Penn State player in three degrees. Recruiting is, in fact, all about connections. In case you didn't know that. Want another connection? Sure, I can do that.

Berger's older brother (one of them, he's the third of Dan and Cindy Berger's five sons) is Princeton junior Jack Berger. I shouldn't need to tell you who recruited Jack to Princeton.*

* I'd like to point out that this isn't the first mention of the Berger family on TYT. In the course of sharing this story about Jack's exploits as the living definition of student-athlete in Three Stars last October, I said "Incidentally brother Chase, mentioned as being better at his age than Jack, is a late 1994 birth year playing midget major for the St. Louis Amateur Blues. He's also on the affiliate list for the USHL's Tri-City Storm, which drafted him this year. Just in case our APR needs a bump." I don't mean to toot my own horn, but hey, toot toot.

Described as a "talented, versatile forward" Berger is expected to finish out high school in St. Louis next year before joining the Storm in 2013-2014. While in Kearney, there's a good chance he'll team up with 2014 defenseman Kevin Kerr, who was drafted seventh by the team in the USHL Futures Draft on May 1st (Kerr still stands a chance of being picked for the U.S. National Team Development Program). Berger was called up to Tri-City for a pair of late-season games and managed four shots on goal.

He's managed a lot more than that with the Amateur Blues and with St. Louis University High School. Berger helped the latter to a 22-3-3 record in 2011-2012 and an appearance in the Mid-States Club Hockey Association Challenge Cup final. In a 5-3 win in the front end of a two-legged semifinal matchup, Berger scored the last two goals of the game. In all, he had 18 goals and 12 assists for the Jr. Billikens.

His goal scoring total ranked second on the the Amateur Blues this past season, as did his three game winners. Berger scored two of the team's five shorties. He got hot late in the year with 13 points in his last nine games. In 2010-2011, St. Louis plowed through the league at 30-2-8 and advanced to the USA Hockey 18U nationals. Berger scored the opening goal of his team's only win of the tournament, 4-1 over the Colorado Thunderbirds, and added an assist in a loss to Mid-Fairfield.
Posted by Kyle Rossi at 12:16 AM