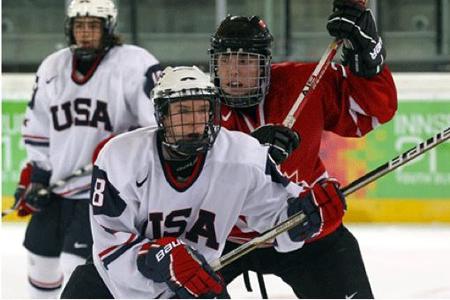 Team Comcast defenseman Kevin Kerr, a 2014 Penn State commit, was the seventh overall selection by the Tri-City Storm in the USHL Futures Draft Tuesday evening. The Futures Draft involves assigning the USHL rights of the top 1996 birth year players. Most won't play in the USHL in 2012-2013 but instead will be on a team's affiliate list with the idea of giving continued development time at a lower level.


“We feel Kerr is a perfect fit for us,” said Storm GM/Head Coach Josh Hauge. “We like our D to get up in the play and be active. He has creativity and defends well.”

He also said that Kerr was the top-rated player on his team's draft board.


“We are very excited,” added Hauge about the draft. “It went pretty much how we expected it to for the most part. We actually got guys that we had penciled in for earlier rounds later in the draft. Overall, we got great value for where we selected guys.”

Kerr, a Bensalem, PA native, played for both the Team Comcast 16U and Holy Ghost Prep in 2011-2012. He was also a member of Team USA for January's Youth Olympic Games, registering an assist in six games.

The Storm, which is based in Kearney, NE, is the USHL team of incoming freshman forward Kenny Brooks, whose 15 goals and 27 assists were good for second on the team in scoring. Tri-City went 26-33-1 this season to make the Clark Cup playoffs, but quickly exited in the first round. The team is owned by Brooks' father, Kirk Brooks.
Posted by Kyle Rossi at 1:39 PM