2013 goalie Eamon McAdam, the last Penn State recruit to still be playing, now isn't thanks to his team's loss to Green Bay in the decisive game five of the USHL's Clark Cup finals (I suppose he'd be done either way, but whatever).

To be honest, I'm kind of glad the Black Hawks lost. Their winning would have put me in the awkward spot of having to write a post about McAdam winning a championship - awkward because he's Waterloo's backup and recorded zero minutes in the playoffs. Since his teammates lost, he just gets this. During the regular season, McAdam was 11-7-0 with a 3.50 goals against average and a 0.882 save percentage, helping Waterloo to third place in the Western Conference.

The pride of Perkasie, PA is the top returning goalie on what should be a strong team again next year, as starter Stephon Williams is headed to Minnesota State for the coming season.

Unfortunately, there's not a ton out there on the schedule announcement offering more than a reshuffling of PSU's release, but I'll give BSD - whose entry was written by friend of TYT Nate Wells - and BSH shouts (like they need them from me) for these posts, which at least offer opinions like...


While the on-campus home games leave something to be desired - there are only six against D1 teams - Penn State's inaugural season had both challenges and winnable games alike. Playing 8 of the 12 Atlantic Hockey teams (arguably the weakest college hockey conference) will be a good barometer for the Lions early in the year while series against Big Ten foes Michigan State and Wisconsin will give motivation when they are conference rivals next year.


It shouldn't really be looked at as a negative: It's their first season in Division 1, they're going to be bad, and power schools don't want to play weak teams. It's just the way it is. But if you had any hopes of Penn State making some sort of miraculous at-large bid to the national tournament in their first season, this schedule isn't going to get them there.

Two weeks ago, a picture of incoming women's player Jeanette Bateman receiving $10,000 in scholarship money from the John Lynch Foundation was buried somewhere in the middle of "Best of the Rest." Turn that picture into a 2:00 video of Bateman basically introducing herself? Yeah, I'll bump that up a few.

Can someone please tell me which phone records these ridiculous vertical videos?

Anyway, here's a brief clip of the Hockey Czar from the PSU Alumni Leadership Conference two weekends ago.

Penn State will be a new rival for Buckeyes
(Columbus Wired)

Since the days of Villanova, Niagara College, Michigan-Dearborn, Ohio and Delaware are gone (or soon to be gone in OU's case), Penn State needs a new archrival. That one team you hate over all others, and they hate you on the same level. The one where you say "I'd gladly go 4-30, as long as the four come against them" (even if that's not entirely true) and do silly things like refuse to speak or type that team's name. And unlike in football, I think it has a shot of happening for NCAA men's hockey.

In football, Penn State is the other woman in a rivalry love triangle involving Ohio State and Michigan. There have been and will be years where PSU-OSU means more than OSU-Michigan. That affair from 2005-2009 - which took place while Michigan was on an extended business trip to Irrelevantistan - was quite fun. But at the end of the day, even after promising to end things, the Buckeyes will always end up back with their wife, leaving PSU to the domain of angry texting and futile attempts to break them up.

The good news? Michigan's married to Michigan State in hockey. Anything you see saying otherwise comes from people who don't follow the sport closely and assume Michigan pairs off with Ohio State for everything. While it's hard to just declare a rival and have it be so (these things need time to develop), there are reasons to be encouraged.

At least one outlet says that Penn State's playing two top 10 teams next year. Just don't click the link to their picks from last season at the bottom of the page.

Syracuse has joined Mercyhurst and Lindenwood among the womens' CHA rivals in announcing their incoming recruiting class. So half down, half (Penn State, Robert Morris and RIT) to go.

Speaking of Lindenwood, it sounds as if Iowa State will no longer have the only hockey cheerleaders in the ACHA. LU does a good job sharing resources between their hockey programs, so I have to assume that they'll swing between the ACHA men and the NCAA DI/CHA women.

In case you wanted to know where Guy Gadowsky will be on July 20th and 21st, he has a speaking gig in Joe Sakic's hometown. 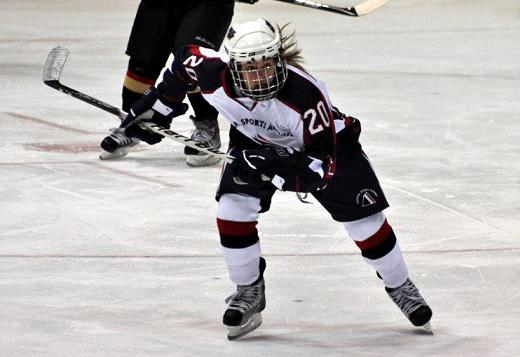 A rundown of the NSA senior girls hockey players, which includes Emily Laurenzi, of course.


Four-year player Emily Laurenzi has become one of the most influential players on the team. Laurenzi has, “hard work and commitment on the ice [that] easily sets her apart from other players” and “you will never find her taking a shift off .” After four years Laurenzi has accumulated seventy-eight goals, two hundred and three assists, and played two hundred and ninety games. Her hard work earned her a place on Penn State’s brand new Division One girls program, becoming the first recruit in the history of their program. Laurenzi is “excited for something new since she has been [at NSA] for a while, but will miss it.”

I assume it was a coach and not Laurenzi saying that her hard work and commitment sets her apart, but it's never mentioned. I should be nice though - Laurenzi co-wrote the entire piece.

UPDATE: Laurenzi tells me that the quoted words not from her are from NSA coach Kelli Vossler. So there you go!


Rochester 11, Farmington 8: Jessica Leininger had four goals and Katie Krako and Jordin Pardoski each had two goals and one assist for Rochester (13-3, 6-0 OAA White). Lauren Anderson had three goals for Farmington (4-10, 4-2).

Just to review, Wisconsin moved their hockey series with PSU to a Sunday and Monday (February 24th and 25th) to avoid conflict with their state high school wrestling tournament. They're also relocating their March 8-9 home series with St. Cloud State to Madison's Alliant Energy Center - the Badgers' home ice from 1967-1998 - to clear the Kohl Center for their state high school basketball tournament. Penn State, meanwhile, blew their gig hosting PA's high school basketball tournament because someone can't read the instructions on a request for proposals.

Not that I really care. If anything, I disagree with Wisconsin's position and feel that UW should come first at UW facilities. Priority on booking dates is a big reason why it's beneficial to have your own facility in the first place. Remember the uproar when Penn State basketball was forced to practice in the IM Building due to a Bon Jovi concert at the Jordan Center? Well, I like Bon Jovi better than I like high school basketball, put it that way. I just found the contrast amusing, that's all. Carry on. Somewhere else, I'm done with this post.
Posted by Kyle Rossi at 2:00 AM