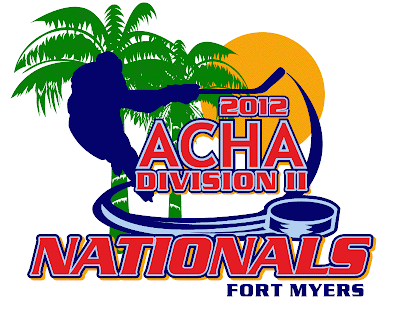 The Ice Lions have had a lot of success in their history. Former coach Mo Stroemel, now an assistant with the NCAA women's program, led the team to the 1997 ACHA Division 2 national championship game as well as three other appearances at nationals in his eight seasons at the helm. Pat Fung then kept it going with trips in 2005, 2006 and 2007. Still, the big prize has eluded the program to this point. In two days, just outside of Fort Myers, FL, first-year head coach Josh Hand and his squad will begin their attempt to rectify that.

What are their chances? Pretty good...I think. One of the things that makes D2 nationals compelling is that there is very little crossover between conferences and regions during the season, so projecting how things will play out once everyone is thrown together is pretty difficult. Penn State, for example, has only played two other tournament teams this season while the D1 Icers (for example) played 10 of the other 19 teams at D1 nationals during the regular season.

What we do know: the 16-team tournament is divided into four pools of four teams. Each pool contains one team from each of D2's four regions. Here's how they'll be grouped, including their regional designation (W = West, C = Central, NE = Northeast, SE = Southeast) and rank within that region. The top two teams in each region (based on polls) earned autobids to the tournament, while the other two had to navigate tournaments involving the teams ranked third through tenth in each region on February 25th and 26th to qualify.

Following a set of round-robin games that begin Friday morning and conclude on Sunday, each pool winner will advance to the semifinals on Monday and (if they win there) the championship game on Tuesday. Here's a quick look at the teams PSU will need to beat to make it through the weekend. 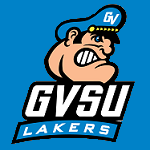 GVSU - the defending national champs - presents as a team eerily similar to the Ice Lions. Stop me if you've heard any of this before.
Unexpectedly, and unlike Penn State, GVSU struggled both before and after the streak. A 1-2-1 start bookended a 3-3-0 finish to the regular season.


"We struggled during the last couple of games," [junior defenseman Craig] Marrett said. "Every team will have some sort of slump, it just happens no matter what sport or level of play. If there's one thing we have to be concerned about, it's that we have that hanging over our heads still. We can't go into Nationals in a slump; we have an opportunity this weekend to get rid of all that by winning two really good games, which will really boost our confidence."

The Lakers, of course, did find their form in wins over Ferris State and MSU to take the GMHL crown.

The stats are just as eye-popping as the wins - and even there, they track pretty closely with PSU. Leading goalie Josh LaVigne has a 2.20 goals against average, which trails very few starting goalies, although Tom Badali (1.37) is one of them. Ryan Welch's 29 goals rank 22nd in D2, while Ice Lion Chris Lewis is just ahead with 30 (Welch also starred alongside Jim Recupero on the D2 Select Team earlier this season, but hey, one comparison at a time). The guy setting Welch up tends to be Eric Beaupre and his team-high 36 assists, while PSU's leader in that category, Recupero, has 28 apples.

If you only watch one game during the Ice Lions' run through the round robin portion of the tournament, make it this one. Not only is it likely to determine Pool D's semifinal representative, but the winner may very well take the whole thing. 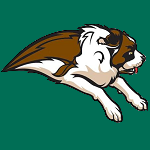 First off, the Saints are an exception to something I said at the top of the post, as they have quite a few opponents in common with the Ice Lions. They opened the season with a tie and a win against UMBC. The next weekend, they swept Temple. SC also beat Liberty 4-2 on November 12th and Virginia Tech 3-1 on February 11th. Penn State was 9-0-0 against those teams, although the Hokies pushed PSU to a shootout on January 14th.

Most of the rest of Siena's record was built in the ultra-tough SECHL, where they tied with William Patterson (the top seed in Pool B if you glossed over that) for the regular season title at 10-2-2, but then fell to the Pioneers 3-2 in the league championship game. To be sure, Siena is a dark horse in the group behind GVSU and PSU, but they're certainly a quality team that can sneak up on people and win their way to the semis.

Former SUNY-Cortland (NCAA Division III) Red Dragon Sean Williams is now in his sixth year at the helm of the Saints and with four nationals appearances in that time, SC can fairly call themselves one of the best programs in D2. A highly defensive team that surrenders fewer than two goals per game (backed by junior goalie John Schlegel and his 1.91 goals against average) will help see to it that Siena is a tough out. Up front, Chris Harjung (16 goals and 22 assists) and Randy Ciciola (15 and 22) provide enough offense to get the W on most occasions. 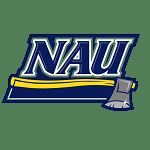 The IceJacks are heavy underdogs to make it out of the group. In fact, in a Hockey 101 tournament pool, 12 of 36 entries (at the time I checked) tabbed NAU as the most likely team in the entire tournament to head home at 0-3. So why the disrespect?

One place to start is their fairly unimpressive 18-12-1 record, which includes just 7-9-1 in games played away from home. NAU was 1-6-1 against teams in this tournament, winning at Arizona State on October 7th and drawing with Utah State on February 4th in a wild 8-8 game. Also, while the school has quite an interesting hockey history - including a brief time in NCAA Division I that produced NHLers Greg Adams and Bob Beers - success in the program's current incarnation is much more recent. The IceJacks went to nationals in three consecutive years in ACHA Division 3 (2007-2009), but this is their first appearance at the D2 level after moving up following that 2008-2009 season.

Still, as the Icers can tell you, there's something to be said for a team that has to battle to get there. Here's the IceJacks' road through the west regionals.


They first had to make it past #8 San Diego State, a team who NAU has lost to the last six straight meetings. After getting off to a quick start 1-0, NAU fell behind later in the game and had to battle back. Down 5-4 late in the third period, Ryan Greenspan netted a breakaway back-hander to tie the game. Both teams then held off furious rallies to send it into overtime.

Five minutes into the overtime period, NAU took care of an SDSU turnover and was able to keep the puck in their own zone. Flagstaff native John Isbell received a pass and fired a quick wrist shot over the shoulder of the SDSU goaltender to give NAU the intense 6-5 victory and kept the playoff dreams alive.

In the second game, NAU battled with the #6 Utah Utes in a close game throughout. After a scoreless first period, both teams traded goals in the second. Through the first two periods, the strengths of both teams were clearly evident. Utah used their speed and quickness to keep NAU’s offense at bay and NAU used their size to play physical on Utah.

In the third period, NAU was able to break the close game as Michael Farnham gained the puck in the corner and fired a shot in the middle of the zone to make it 2-1. Utah pulled their goaltender with a minute left to give themselves a man advantage but NAU held it off and netted an empty-net goal with seven seconds left to seal a National Tournament berth.

If Northern Arizona is to pull off what is unthinkable to many, they'll need to find some defense and goaltending that hasn't really been where it needs to be all season - or hope Gregory Park and Taylor Dustin find a way to make the opposition's D look even worse.

Really, there's little reason for PSU to be concerned with the 12 teams outside of Pool D right now, as none stand a chance of crossing paths with the Ice Lions until the semifinals - assuming PSU makes it that far. But here are some things to watch from each other group.

Pool A: Besides Grand Valley State, Michigan State is the only active program to win a D2 national championship in the past eight seasons. That's not quite as impressive as it sounds on the surface, since former champions Oakland (2004, 2006) and Davenport (2008-2010) now compete in Division 1. Still, the 2005 and 2007 winners should be considered a favorite in the group. They were responsible for snapping GVSU's long winning streak and head coach Jim Martin, architect of both of the Spartans' titles, certainly knows what it takes to win the tournament. PSU's MACHA rival UMBC will also compete in Pool A, although with a ton of injury issues, they'll have a hard time advancing - still, Jon Drago gives the Retrievers that puncher's chance that only good goaltending can provide.

Pool B: Utah State is bringing the top two scorers in all of D2 to the tournament. Brendan McDonald (108 points) and Brian Gibbons (100) are the only players in the country to hit the century mark, with each doing it in 29 games. Still, USU's big scorers will have to get through William Paterson to advance. The Pioneers are making their fourth consecutive nationals appearance and rolled through a very tough schedule to the tune of 26-2-3.and an SECHL playoff championship. MACHA team Virginia Tech is also in this group, but they are heavy underdogs (in fact, they were the only team to get more 0-3 votes than NAU).


Pool C: Florida Gulf Coast is both the host school for this tournament and one of its favorites. While they've only lost twice this season, one of those losses was to Northeastern, conveniently stashed in the same pool to give them something to think about (the other loss was to D1's Eastern Michigan). FGCU has come under criticism in ACHA circles for both the age of their players and their nomadic nature. One example of both is 24-year-old junior Jake Coyle, one of the team's top scorers. After significant stints in the NAHL and EJHL (with a USHL call-up mixed in for good measure), Coyle played at NCAA Division III Utica College in 2008-2009. He left for Lindenwood (D1 version) after one season, then moved on again after one season with the Lions, to FGCU. Another top player, Mike Lendino, is in his sixth year with the program.