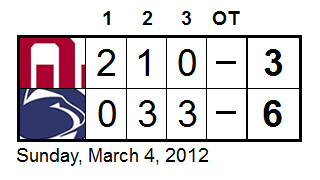 For those who didn't see Sunday evening's quarterfinal between Penn State and Oklahoma, an easy way to relate it might be to compare it with the February 4th meeting between the same two teams. Match the first 35 minutes of this one to the first 55 of that one, then the next six to the last five and it's a convenient and quick explanation. The Icers were down and out, but charged back with pointed emphasis.

Some games, though, defy simple explanation. This was one.

A sluggish start was punished late in the first period, when Chad Hudson beat goalie P.J. Musico. Just three minutes later, Blake Martin recovered an errant pass near the Icers' blue line. He managed to keep it in the zone and feed Jesse Bryant down low. Bryant then went high for a 2-0 Sooners lead into the first intermission.

While Bryce Johnson did pull the Icers within one on a gritty rebound goal, it didn't go unanswered. With Chris Cerutti off on a cross-checking call, some great movement on the OU power play ended when Martin passed from the left point to Hudson, stationed underneath the right circle. The Texas native finished off the goal, and Penn State was once again on the ropes.

There was 8:45 left in the second period at the point of Hudson's second, and for decades, hockey scholars all over the world have struggled to explain what happened next: Seemingly out of nowhere, the Icers started clicking. In a big way. An Oklahoma team that had done a masterful job of smothering PSU to that point was suddenly under siege. The payoff came first when Michael Longo took it himself on a 2-on-1 and barely squeezed a shot through OU goalie Nick Holmes at the 16:34 mark, then with 38 seconds left when Johnson calmly collected a loose puck off of a scramble in front and potted his second dirty goal of the proceedings. Just minutes after many in the large crowd commenced consideration of their season eulogies (guilty), the game was tied at the second intermission.

A bizarre twist helped bring the Icers the rest of the way to victory. As time expired in the second period, Holmes head-butted PSU's Justin Kirchhevel, who had wandered into the OU end to compare chirps with the netminder. Kirch, as anyone would, fought back. The altercation drew a major penalty for Holmes and a double minor for the Icers' leading scorer. So the beginning of the third period brought a rare sight: a goalie in the penalty box, as required by rule for a major penalty (but not for a minor). Holmes' backup, Colin Fernandes, was forced into the game cold and rudely greeted by Tommy Olczyk and Dom Morrone, both of whom scored on Fernandes in his first 1:01 manning the crease while assisting on the other's goal. The Sooners actually killed off the one-minute PSU power play resulting from the Holmes-Kirchhevel incident, but the damage had already been done. A Longo empty-netter provided the final margin.

Penn State advances to the semifinals to meet 13th-seeded Oakland, Tuesday at 5:00 p.m. 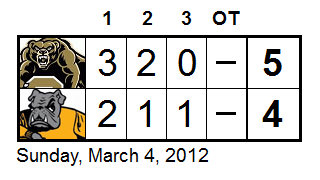 In a penalty-laden affair between Michigan-based GLCHL rivals, Oakland topped Adrian behind a pair of goals from Frank Matyok. The junior opened the scoring off of a faceoff 4:28 into the game, then scored on a power play point blast that somehow got through Matt Anderson about 10 minutes later. That second goal was significant because it began a three-goal Grizzlies swing that turned a 2-2 first-period tie into a 5-2 Oakland lead late in a second period that featured ten minor infractions, six against OU.

Adrian did score the last two goals of the game, including Darrell Boldon's on the man advantage with 29 seconds left, but the comeback remained uncompleted. Oakland was already the only one of the eight teams that played in Friday's first round to make the quarterfinals, and now they're a round beyond that.


"We are doing this together." Matyok stated. "Nobody in the league thought we would be here. We knew it all along this team started in the beginning of the year that we can make it this far by believing in each other and hard work." 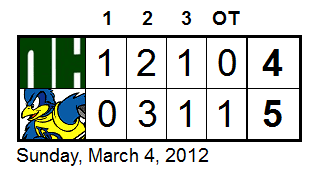 Mark Zeszut's goal nine minutes into a second overtime lifted Delaware to an exhilarating win over the Ohio Bobcats. But before the game became known for its length, its defining characteristic was quick responses.

Less than two minutes after UD's Kevin Miller tied the at one in the second period with a sharp-angle snipe on the power play, Zander Dover restored Ohio's lead on a deflection goal. Michael Piet made the game even again on a one-timer from Andre Menard, but the Bobcats' Michael Schultz (who finishes his career three points in back of the school's all-time scoring leader, current head coach Dan Morris) got it back on the next shift. Delaware finally became the answerer instead of the answered when Chris Galgano's second attempt from up high found its way through a crowd to the back of the net 1:12 after Schultz's goal. Finally, in the third period, Chris Volonnino scored to force overtime 1:37 after Josh Fodor had given OU its final lead of the game.

The period and a half of overtime included four successful penalty kills (two by each team), and plenty of other heart-stopping moments. Then this happened:

While there are still three games remaining in this year's championships, as things stand right now, Delaware has won the consensus "best game of the tournament" two years in a row. Last year's Hens won a quarterfinal game with Adrian 5-4 after Brandon Weiner scored twice in the final minute of regulation to force overtime, where Kevin Miller won it in the second extra period. 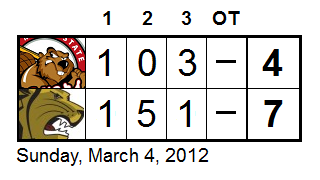 A second-period barrage from the second-seeded Lindenwood Lions proved too much for a late Minot State comeback in Sunday's closing quarterfinal match. In extending their winning streak to 20 games, LU stopped the Beavers' run at 20.


What started as a close battle in the first turned into an offensive showcase for the Lions in the second as they used their speed and crisp passing to score five goals, including two on the power play. The first of those power play goals came from Meletti with 15:56 left in the period with help from Joe Bostic and Steve Brancheau. Neeco Belanger lit the lamp at even strength just over two minutes later off of a feed from Colin Long, and Bostic scored 71 seconds after that on a pass from Cam Chinnery. With 9:04 left in the second, Niklas Bunnstedt buried the puck for the fourth goal of the period for the Lions assisted by Brancheau. Things would get chippy in the latter half of the second which resulted in a five-on-three power play opportunity for Lindenwood. Gorczyca took advantage as he scored with 7:18 left. Long assisted on the play which gave the Lions a 6-1 lead at the second intermission.

With a comfortable five goal lead, the Lions went into a defensive mode, but the strategy almost backfired as the Beavers started chipping away, scoring three unanswered goals in the final period to pull within two of Lindenwood. In the end, the margin was enough for the Lions as they added an empty net goal from Long with three seconds remaining to make the final score 7-4.