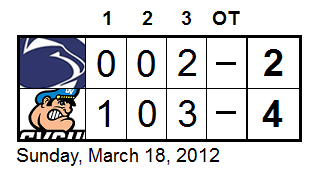 Penn State's season came to an abrupt and unfortunate end Sunday afternoon in a loss to Grand Valley State that decided Pool D's semifinalist at the ACHA National Championships. GVSU will now advance to play William Paterson in the D2 Frozen Four.

Matt Smart's rebound goal with 2:54 left in the opening period held as the only scoring of an intense 40 minutes that saw both goalies - Tom Badali and GVSU's Josh Lavigne - turn aside their share of scoring opportunities in a game that often vacillated between tight checking and wide open. The sequence that ultimately decided the game came when Lakers Eric Beaupre and Brad Keough scored in the first 2:17 of the third period. Beaupre's goal, it should be noted, came with Badali tossed aside in what may have been a missed goaltender interference call.

Just when PSU looked buried, down 3-0 late in the third period, they found a spark and demonstrated their guts. First, on the second of just three total power plays in the game, Ryan Gannon got the Ice Lions on the board on a rebound goal with 4:07 left. Just 2:09 later, with 118 seconds remaining, Ben Snow cut the lead to 3-2 on a similar-looking goal to swing the match's outcome back into flux. The rally, however, was cut short when T.J. Laessig was forced to take a penalty to prevent a back-breaking empty net goal shortly after. GVSU added one later anyway to make the outcome academic.

The Ice Lions finish the season 30-3-0 and with a MACHA championship and a nationals appearance in hand. They are also owners of a now-snapped 25-game winning streak that they would have preferred to last until 28. Seven seniors - Badali, Gannon, Laessig, Ryan Seifert, captain Jim Recupero, Albert Juliano and Sean Davis - depart. While that represents a fantastic group of players that will be impossible to truly replace, between the coaching staff, returning players and possible newcomers, it's also hard to deny that the best may yet be ahead of this program.