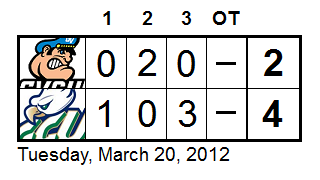 GVSU - the team that advanced from the tournament's Pool D with a 4-2 win over the Ice Lions Sunday - turned a 1-0 deficit after the first period into a 2-1 lead entering the third, only to subquently see the the result flipped back the other way. The Brothers Wilhelm, Brad and Chad (aside: their parents may be pure evil) provided the goal scoring for the Lakers, who won the 2011 national championship with a win over Michigan State.

A repeat was not to be, however. The Eagles needed only 61 total seconds on the two third-period GVSU penalties to swing the score in their favor. Goalie Ryan Lynch made sure it held up, as he turned aside 47 of 49 shots. That Lakers' Josh LaVigne was also stellar in defeat, making 36 saves before FGCU's 40th shot found a vacated cage to seal the win.