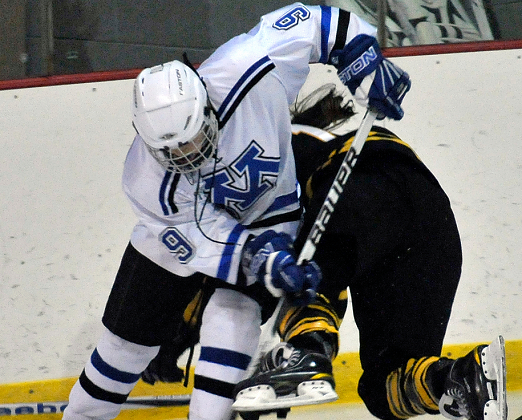 * I'm sure you know already, particularly since I immediately began including her in Commit Cycle and on the Current Commitments page. However, now that the end-of-season insanity has died down, I wanted to make sure that this noteworthy recruit got her own post.

Petersen has been a key cog on a Minnetonka team that has now won back-to-back Minnesota AA championships.

Then again, "key cog" might be understanding things a little. As a sophomore in 2010-2011, through a 23-1-1 regular season, Petersen was second on the Skippers in goals (17, four of which were game winners) and fourth in points (34). She saved her best, though, for the 6AA section and state tournaments. She had a goal and an assist in each of two blowout wins over Robbinsdale Armstrong and Buffalo, and following a section title win over Benilde-St. Margaret's, Tonka advanced to the Minnesota championships at the Xcel Energy Center in St. Paul for the first time in program history.

In a 4-1 state semifinal win over Coon Rapids Petersen had three assists, then topped that performance in the final against Edina.


Open ice was at a premium for the vast majority of the second and third period. But in the final minute of regulation of Saturday’s Class 2A girls’ hockey title game, Minnetonka’s Amy Petersen suddenly found herself alone in front of the Edina net.

She scored up high with 39.6 seconds left, breaking a tie that had existed since the first period and giving the Skippers a 3-2 victory and a state championship.

Petersen also scored in the first period of the game and assisted on the only other Skippers goal. Afterwards, she spoke with Twin Cities TV station KARE about the game, her goal, and (bonus for people trying to write a post about her) the type of player she is.

Tonka, as mentioned, won it all again this past season, taking the championship 3-0 over 2012 defense recruit Paige Jahnke and her Roseville Raiders. The Skippers weren't the only thing repeating either - Petersen was named to the all-tournament team for a second time. This accolade came largely through her pair of assists in the state title game, and by scoring the second most important goal of her life in the semifinal against Lakeville North. Trailing 1-0 late, Minnetonka's Sidney Morin forced overtime with 20.9 seconds left. Then...


[Petersen] scored at the 6:21 mark of overtime...[she] took a pass from Morin at the blue line, maneuvered around a Panthers defender and put the puck over goalie Cassie Alexander's shoulder.

In addition to her tournament honors, she was named an honorable mention to the AP's all-state team and serves as one of Minnetonka's alternate captains. That latter point shouldn't be lost as Josh Brandwene seeks to assemble his first teams in a manner that includes plenty of leadership and playmaking ability. In Petersen, he decidedly has some of both.
Posted by Kyle Rossi at 12:31 AM