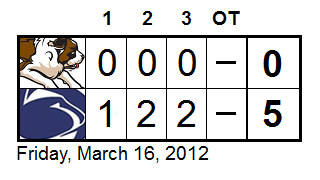 The Penn State Ice Lions opened their attempt at a first-ever national championship in style, with a dominating win over the Siena College Saints Friday morning at the ACHA D2 National Tournament. Despite a first period that played out in favor of Siena's defensive style, PSU still managed to take a 1-0 lead into intermission thanks to Ryan Seifert pumping one home from the slot on a nice feed from the end boards from Franky Reluzco, following his initial attempt on goal. The Ice Lions beat Saints goalie John Schlegel twice more in short order early in the second to build what would prove to be an insurmountable lead. First, Reluzco scored on a beautiful back-door feed from Chris Dinsmore on a 2-on-1, then Fredrik Linge threw one on net speeding down right wing that Schlegel misplayed.

Siena's best chance to get into the game came from consecutive mid-period penalties to the Ice Lions, but both were successfully killed - the first mostly thanks to effective shot blocking, the second largely because of goalie Tom Badali. Badali finished most of his shutout-worthy work during another Saints advantage late in the second, and third-period PSU goals from Neil Laessig and Ben Snow may prove far from meaningless if a tiebreaker is required down the line.