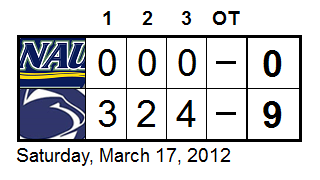 The Ice Lions turned in a dominant and balanced effort in a 9-0 thrashing of Northern Arizona in the second game for both teams at the ACHA National Championship Tournament. The game was never really in doubt after Ryan Urban scored in the first couple of minutes, followed by Franky Reluzco and T.J. Laessig in a first period that saw PSU outshoot the IceJacks 24-5.

Chris Lewis gave a taste of what was to come by using his speed to set up Laessig's goal, then followed it up with a natural hat trick - the only two goals of the second period, followed by scoring the opener of the third. Chris Putsch, Chris Dinsmore and Jim Recupero added late goals to complete the eye-popping scoreline.

Tom Badali, who made a few fantastic saves (particularly on one late-game penalty kill) despite the one-sided game, earned the shutout for the second consecutive day and has yet to allow a goal in the tournament. This fact means more than statistical window dressing, however. The Ice Lions next play Grand Valley State Sunday afternoon at 2:30 p.m. Either team can win Pool D and advance to the semifinals by winning. In the event of a tie though, PSU would advance based on their present total of zero goals against (compared to GVSU's three).