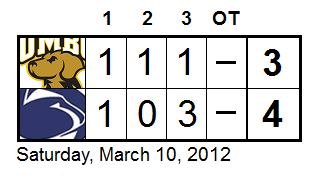 Behind two third-period goals from Chris Lewis and another from Ryan Seifert, the Ice Lions came from behind and defeated Maryland-Baltimore County 4-3 in the MACHA championship game Saturday night in York, PA.

Both PSU (28-2-0) and UMBC (23-7-2) earned their way into this game - dubbed "The Brawl For It All" by the conference - by winning their divisional playoffs February 17th-19th. The Ice Lions beat Rider 4-1 for the North Division title, while the Retrievers took down Liberty in the South.

In the final between the two best teams in the league both through those playoffs and all season long, the Retrievers twice forced Penn State into one-goal deficits and twice the Ice Lions responded. First, it was senior captain Jim Recupero answering a UMBC power play goal with just 12 seconds left in the first period. Then, after dominating long stretches of the second period, Penn State still found itself trailing entering the third period after UMBC's Erik Becker beat Tom Badali with five seconds remaining in the period. From there, though, Lewis took over.

The former Boston Bulldog evened the game at 2 early in the third with a dirty power play goal and Seifert put PSU ahead for good. When the Ice Lions found themselves in penalty trouble immediately after, while hanging on to a 3-2 lead and with half of their defensemen unavailable, it was Lewis who drew a penalty to even up the sides while making a power move to the net. He then added the insurance in short order.

That insurance became necessary when Retriever forward Colin Devlyn scored with 2:01 remaining. Otherwise, though, it was the Badali show late as UMBC pushed hard to force overtime.

As Recupero's tweet says, the senior netminder was in fact able to keep the Ice Lions ahead.

The win was the 23rd in the row for PSU, a streak they hope to extend to 28 before the end of the season, as the Ice Lions will now head to the ACHA D2 national championship tournament in Fort Myers, FL, beginning Friday against Siena and continuing against a pool that also includes Northern Arizona and Grand Valley State. UMBC has also earned one of the 16 bids to nationals and will take on Michigan State in their lidlifter Friday.
Posted by Kyle Rossi at 3:05 PM