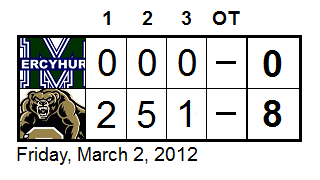 The thirteenth-seeded Oakland Grizzlies used dominant special teams to dispose of an outclassed Mercyhurst in the opening match of the ACHA national championship tournament.

Following a strong first few minutes from the Lakers, OU turned an early shorthanded situation into momentum. Shortly after Alexander Hoffman's boarding penalty expired, Oakland gained a power play, and Jordan McDonald cashed it in for the opening goal. McDonald again factored into the scoring six minutes later when he pulled the puck from the boards to feed Billy Balent, who whipped out a filthy toe drag/bury combo to make it 2-0 at the break. From there, things got a little out of hand.


The second period saw the Grizzlies explode for five goals including a rocket on the power play by defenseman Dustin Hopfner.

Not to be outdone forward Adam Novack would fire a rebound shot into a wide open Lakers net for another power play goal.

MacDonald and Novack would also add a goal each for the Grizzlies later in the second period.

Midway through the second period forward Ethan Range would extend the Grizzlies lead to 5-0. Range would also score the lone Grizzlies goal in the third period.

In all, Oakland was 4-of-9 on the power play. The Grizzlies will now face No. 4 Arizona State Saturday morning at 11:00 a.m. 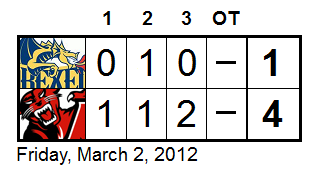 A game Drexel squad gave defending national champion Davenport all they could handle before falling 4-1. After the Dragons dominated play through the first 16 minutes, the Panthers flipped on a switch while killing a late Jeff Slusser cross-checking penalty. Shortly after, with only 17 seconds left in the stanza, Ben Dykstra one-timed Brock Carlston's feed home from the high slot to complete the drastic momentum swing.

The score remained 1-0 until 5:00 into the second period, when Norm Farr was awarded - and converted - a penalty shot to make it 2-0. Farr had broken in on Drexel goalie Dan Pyne alone, but Dragons defenseman Mike Antoni came back and took his legs out (whether he successfully played the puck first to make the penalty shot a bad call is a matter of some debate, especially with Drexel partisans). Ross Denczi sliced the Panther lead in half off of a centering feed from Kyle Zoldy later in the middle period, but the Dragons would get to closer, as Dysktra added a second goal with 3:56 left to seal the win before an empty-netter closed the scoring.

Here are the thoughts of Davenport head coach Phil Sweeney:

"We had to do what we had to do to win the game. It wasn't the prettiest thing in the world but it's the national tournament and you're going to have games were the puck bounces over the stick or guys have breakdowns. To their credit, Drexel played us tough. They played their system, had odd-man rushes and [goalie Phil] Graveline came up big when he needed to." 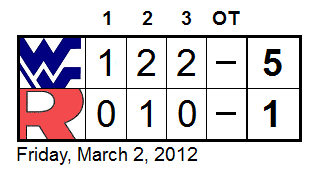 Arguably the most anticipated game of the first round failed to live up to that billing as West Virginia cruised to a shockingly easy 5-1 win over Rutgers. The Mountaineers move on to the second round, where they'll play Penn State Saturday at 5:00 p.m.

Really, the only reason the score wasn't more one-sided was the efforts of RU goalie Brandon DeLibero. He stopped 15 of 16 West Virginia shots in the first period to keep the Scarlet Knights temporarily engaged and 32 of 37 overall. The Eers placed themselves firmly in control with two goals 1:36 apart early in the second from Christian Lewton and Sam Jarrett. Jarrett added a second goal in the third period, and Conor Frei also tallied to thwart any notion of a Rutgers comeback. The Knights' extremely potent top line, despite a second-period Matthew McDonald goal, was largely shut down by a nice defensive effort, and RU was unable to find a secondary attack. 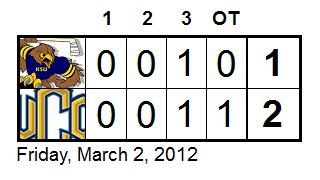 If the Rutgers-West Virginia game was disappointingly non-competitive, this tilt more than made up for it. I mean, what else would you expect from a matchup of a team that lost to Penn State 13-1 one week ago (part of a 13 game losing streak overall) and one that beat the Icers in January?

Thanks largely to the efforts of Golden Flashes goalie Justin Wisniewski, who stopped 63 of 65 shots playing in his hometown of Strongsville, OH, the expected blowout became an unlikely classic. He and Central Oklahoma netminder Tory Caldwell traded saves through a scoreless first two periods. But when the ice tilted towards Wisniewski as the game went on and Broncho defenseman Tyler Benson walked into the high slot and roofed one over him with 15:50 left in the game, it looked like the end for the Flashes. The story, though, was just beginning.

In the extremely late stages of the third period, and during a scramble in front of the UCO goal, Caldwell pushed his net off and was busted for doing so a single second away from victory. Penalty shot, Kent State. Jeremy Melbye calmly buried it, forcing overtime, and forcing me to delete my queued-up final score tweet.

UCO dominated play for the first five minutes of the extra session, but KSU somehow rediscovered their legs and evened things out for a wild stretch of prime chances in each direction for the next seven. With 4:13 left though, Melbye - the hero of the recent past via his penalty shot - became a goat. His turnover deep in the KSU end went right on the stick of UCO's Patrick Higgins, who teed up teammate Corey Allen to blast home the winner and send Central Oklahoma to the second round, where they'll play No. 2 Lindenwood Saturday at 8:00 p.m.