The View From Everyone Else 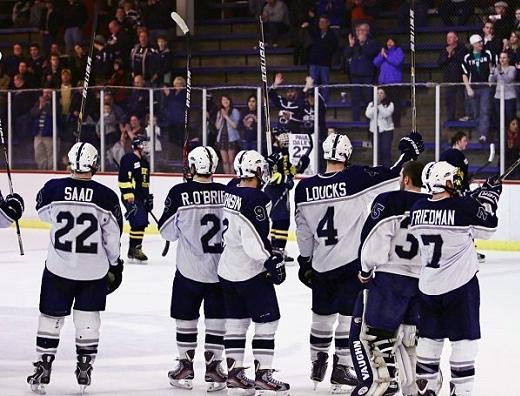 Surely by now, you've read and laughed at (I see you, Josh Weiner) the official TYT predictions for nationals (Part I, Part II, Part III). Before we crank things up tomorrow, I wanted to highlight some of the other great work done ahead of the show.

Every tournament game will be streamed on FastHockey.com. The site requires a free account, but the usual game credit fees will be waived for all ACHA tournament games.

Let's start with the nuts and bolts - the ACHA site's tournament page, which includes a schedule [pdf], brackets [pdf] and a link to the tournament's official site (which includes ticket and hotel information).

IcersGuy always manages to say a couple things I wish I had said, whether about already-played games or now this. His read on the Icers is spot on, and he also hedges on predictions better than me.

Tournament Thoughts
(The View From the Booth)

Steve Penstone's entry, as usual, is packed with interviews - Guy Gadowsky and Dan Loucks are in the spotlight this time around, and the Joe Battista conversation from the second intermission of the Kent State game is included as well.

Icers Take Aim at One More National Title Before Going Division I
(statecollege.com)

Twitter god Ben Jones gets insightful quotes from Gadowsky, Kurt Collins and Dan Petrick here. The Collins/Petrick angle - local guys who have a history with the Icers and State College hockey prior to their freshman years - is a previously undertapped one.

A bold call from Christine Newby, but then again...

The official site takes a look at each of the four possible Icers opponents on Saturday and Sunday.