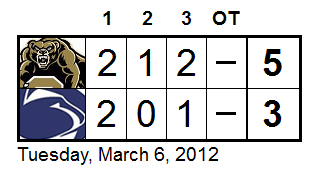 This isn't the way it was supposed to end for the most successful team in ACHA history.

In their club hockey swan song the Icers, buoyed by four NCAA Division I transfers and several others with hopes of playing for the coming varsity program, would take the ACHA by storm and cruise into the sunset with the Murdoch Cup. Everyone just knew that the only proper ending for the storied program was an eighth national championship and a record-extending sixth since the ACHA's founding in 1991-1992.

...the last Icers Cup was in 2003, nine seasons ago. A brutally honest assessment of Penn State in recent seasons would show a program that has remained close to the top of the pecking order, but one that has been passed by others. After 2003, PSU stopped winning championship games. After 2007, they stopped making them at all. Heartbreak has overtaken happiness. So maybe it's even more appropriate that Icers history ends with a cloning of one of those moments of lesser fortune.

In 2007, Will McMahon was largely to blame for stopping the Icers cold in the national championship game, as Oakland won the title in its first year of Division 1 play. McMahon scored eight times, adding four assists, during the Grizzlies title run in Boardman, OH. The best of his tournament MVP and ACHA player-of-the-year season came in OU's Murdoch-clinching 5-1 win over the Icers when the 2010 ACHA Hall of Famer scored four of the Grizzlies' goals and assisted on the other.

Five years later, the role of four-goal-scoring nemesis was ably played by Jordan MacDonald, a senior from Rochester Hills, MI. To be sure, the 220-pound MacDonald plays a different style of game than the diminutive McMahon - but both are equally effective at terrorizing defensemen, as it turns out. Exhibit A: With Oakland clinging to a 3-2 lead in the third period, Dan Loucks retrieved a loose puck near the Icers blue line. Before the senior captain could make a play with it, MacDonald was on top of him, ripping the puck away, then coming in unabated on Matt Madrazo and scoring. Exhibit B: After Nate Jensen scored to slice the OU lead back to one at 4-3 and with the Icers again pushing for a tie in the last two minutes of the game, Eric Steinour won an offensive draw back to Jensen, who swung the puck across to Peter Sweetland. Once again though, the opportunistic MacDonald quickly approached, outmuscled a PSU defenseman for the puck, and took it himself on the resulting 2-on-1. Game over. Season over. Icers over.


That's not to say that Penn State didn't have its moments. Michael Longo, who had a fantastic tournament, answered MacDonald's first goal with a one-timer blast from Bryce Johnson, who also had a fantastic tournament, in the right wing circle. Jake Friedman answered MacDonald's second with a drive through traffic late in the first period. But really, the story of this tilt was MacDonald, his selfless teammates that put on a shot-blocking clinic through long stretches of Icers territorial dominance, and goalie Matt Toter, who stopped most of what the shot blockers didn't, 35 saves in all on 38 PSU shots. It's also about a team that has performed the once-unthinkable task of playing in last Friday's first round as a 13th seed - essentially needing to win one more game than the tournament favorites - then slaying No. 4 Arizona State and No. 1 Penn State among its four wins en route to Wednesday night's final.

Unfortunately, another storyline has to be the absence of PSU's leading scorer, Justin Kirchhevel. The Alaska-Anchorage transfer from Brookings, SD was parked by Guy Gadowsky for his role in an altercation with Oklahoma goalie Nick Holmes in the Icers' quarterfinal win Sunday night. For the little that it's worth at this point, I sincerely do not believe that Kirchhevel playing would have changed the outcome. Regardless, the head coach's decision was not about the present, but about the future and about the type of program he will run at the NCAA level. Even if I'm incorrect in my assessment and Kirch would have propelled the Icers to victory, Gadowsky is to be commended for a tough decision. "Success with honor," while slighly cliche in PSU circles, is not mere lip service. If success comes at the price of our principles, then we'd rather not have success.

One of my favorite photographs is of Steve Yzerman as the Red Wings legend stepped off of the ice for the final time in his career, following his team's elimination by the Edmonton Oilers in 2006. With one of Yzerman's skates on the ice and the other about to land off of it, it's literally his last moment as an active player. Here's my attempt at something equally poignant to represent the end of the Icers. 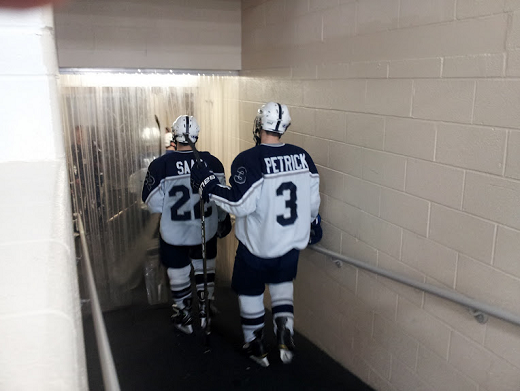 Let the record show that senior defenseman Dan Petrick, a local product who grew up with the program, was the last to exit the playing surface. Much like the baseball greats in the movie Field of Dreams who disappeared into a cornfield, he and his teammates, the Icers, are now a part of history after similarly disappearing behind a plastic curtain. 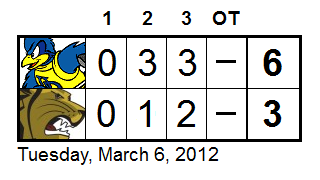 In defeating the Lions, UD exorcised demons beyond simply not appearing in the penultimate game of the ACHA season for a decade. Twice in recent years (2008 and 2011), Lindenwood has defeated the Hens in the semifinals, with last year's defeat at Delaware's home Fred Rust Ice Arena coming as particularly stinging. The semifinal in 2012, though, belongs to the Hens, who managed to keep LU at arm's length throughout the game. Following a scoreless first period, Zeszut struck both first and second. From there, every time the Lions sliced UD's seemingly perpertual two-goal lead to one, the Hens had a quick answer - within 1:13, 4:05 and 1:08, to be specific. That's one mark of a champion, a designation Delaware will try to make official Wednesday night for the first time in program history.