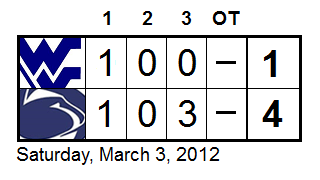 If history is any indication, we may be in for something special over the next few days.

Before dismissing the Icers' much-tougher-than-expected 4-1 win over West Virginia as your choice of a) underachievement, b) overachievement or c) how hockey goes sometimes, consider the following nationals openers from PSU history:
After less-than-inspiring starts, each of those tournaments ended the same way - with one of the Icers' last four national championships. In this tournament's Icers debut, PSU struggled with a team it had beaten by a combined 14-1 in two January meetings. Perhaps by the time the show has run its course, March 3, 2012 will join the above list.

A strong early Penn State push in this second-round tilt with West Virginia abruptly ended with Tod Camara's power play goal for a 1-0 WVU lead with 7:59 remaining in the opening period, when he chipped Ken Bickell's point shot past Matt Madrazo. The Icers had dominated territorially until the too many men penalty that led to the advantage, and the Mountaineers, enlivened by the unlikely lead, started to find their legs and didn't seem particularly dissuaded by Michael Longo's power play goal off of a scramble in front of Mountaineer goalie Rob Borcky with just eight seconds remaining in the first period.

West Virginia did a masterful job all game long of waiting back and keeping the Icers' transition game in check, which has sort of become the book on how to play Penn State this year (blame Ohio for writing said book back in October). Borcky was also very good, stopping whatever got through.

However, it just took one mistake to undo two periods of a well-executed game plan. A muffed shot by the Mountaineers just under five minutes into the third period was astutely retrieved by Bryce Johnson, who started an odd man rush. A charging Brandon Russo was the beneficiary of Johnson's feed, and he buried to give the Icers the lead for the first time. The former St. Cloud State Husky was quite proud of the moment on Twitter following the game.

Another WVU mistake was punished, and some PSU insurance was gained, with 6:55 left in the game when Taylor Holstrom scored just seven seconds after Ken Bickell took a hooking penalty. Shortly after, Justin Kirchhevel matched Johnson in sauce slinging on the rush, with Mike McDonagh on the receiving end to deflect home the match's final goal.

With the win, the Icers move on to the quarterfinals, where No. 9 Oklahoma awaits at 5:00 p.m. Sunday. 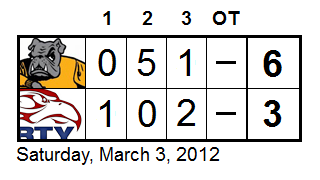 Goaltender Matt Anderson, a stout Adrian penalty kill and a second-period barrage keyed a 6-3 Bulldogs win over Liberty in the opening game of the second round.

Even after AC built a 4-1 lead late in that middle period, the margin was jeopardized by a 2:38 5-on-3 advantage for the Flames. Not only did Adrian kill it off, but Tristan Musser found a fresh-out-of-the-box Alex Norman for a shorthanded breakaway goal that was enough to withstand an abbreviated Flames rally in the third. From the Adrian recap:


#12 seed Adrian took down the #5 seed Flames with a five-goal second period which put the game away. Liberty had a 1-0 lead after one period after Jake Hannon scored at 7:34. The Bulldogs then got to work in the second. Spencer Bonomo scored the first of his three goals on the day at 17:49 and then Ryan Bachman gave AC a 2-1 lead at 13:40.

Adrian's Jordan Spear scored at 8:53 followed by Bonomo again at 6:47 and then a short-handed goal by Alex Norman with eight seconds left in the period. Spear led Adrian with four points including a goal and three assists.

Rick Turner's power play goal at 11:42 of the third made it 5-2 and then Ryley Egan scored at 6:28 to cut the lead to 5-3. Adrian put it away with 5:45 left as Bonomo's hat trick gave the Bulldogs a first-round win. Darrell Boldon also had three assists for the Bulldogs. Matt Anderson stopped 43-of-46 shots for a .935 save percentage for Adrian. 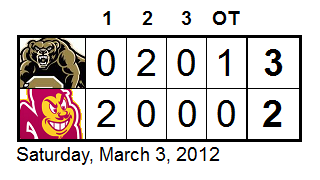 Adam Novack buried the winner with 7:19 left in overtime to complete the biggest upset of the tournament so far, as 13th-seeded Oakland took down No. 4 Arizona State - one of the tournament favorites - 3-2. Said Novack of his golden goal:


"The Sun Devil player broke his stick. I tied the guy up on the wall and Macker (teammate Jordan MacDonald) come up with the puck. We were going two on two and we were going neck and neck with the defenseman and I was able to get wide of him and Mac (MacDonald) threw a nice pass. The goalie slid with me and I went back short side over his blocker."

The extra-period drama was only possible because of goalie Matt Toter's heroics to keep the Sun Devils at bay. Fresh off of a shutout of Mercyhurst in the opening round, Toter turned away 49 of 51 Sun Devil attempts, including every single one of them after the first period ended. Brandon Johnson and Dustin Hopfner scored in the second period for the Grizzlies to erase an early 2-0 hole and (eventually) force overtime. 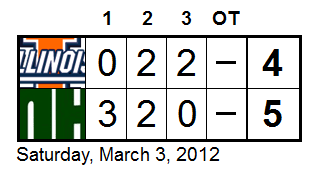 Ohio twice jumped out to three-goal leads, and twice survived subsequent Illinois rallies, as the Bobcats eliminated their CSCHL rivals to advance to the quarterfinals. Tyler Pilmore, Nick Rostek and Jonathan Pietramala represented the first OU barrage. Each scored in the first 10:38 of the game, sending Illini starting goalie Dan Rooney to the bench in favor of Nick Clarke.

At the onset of the second, Illinois came out with a more inspired effort. Another Schultz, Derek, who also wears number 10, broke the scoring drought for the Fighting Illini, sending one past the right blocker of Fedor Dushkin.

Later in the second, an unlikely strike from Matt Welch found twine to bring the Illini to within one. It was Welch’s fourth score on the year. On their heels, the Bobcats buckled down for a run that built their lead up once again.

Zack Barbis fired top shelf after splitting the Illini defense to put the lead at 4-2. Later in the frame, another skater got his fourth goal of the year. This time, it was John Luciana, who fired left side past Rooney to build Ohio’s lead back to three goals.

Illinois again trimmed the lead to one in the third period thanks to a pair of power play goals, but could get no closer, thanks in part to a boarding penalty while attempting to get Clarke off for an extra skater. The call negated the extra Illinois attacker, and OU held on for the win. 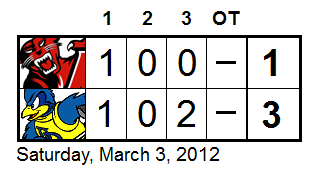 A pair of third-period goals from Ryan McDonald and Chris Volonnino snapped a 1-1 tie and propelled the third-seeded Blue Hens through to the quarterfinals over the defending national champions.

Delaware's win wasn't an ordinary dethroning of defending champs. While the Panthers won the D1 title last season in their first year at that level, they also won D2 titles in 2008, 2009 and 2010. This defeat, then, was DU's first at an ACHA national championship tournament since the 2007 D2 national championship game. 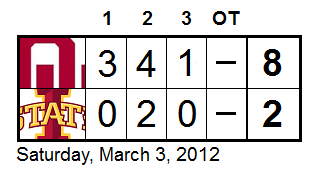 Most tournament games between eighth and ninth seeds are close. This one was not. Oklahoma obliterated Iowa State behind a four-point effort from Travis McKinney and three more from Craig Martin.

McKinney notched half of his points in the first 3:20 of the game as the Sooners buried ISU early. His power play goal opened the scoring, and he set up Broderick Browne at even strength 1:28 later. Oklahoma chased Cyclone goalie Paul Karus before the first period ended on another man-advantage tally, this time from Troy Puente. Karus' replacement, Jared Anderson, wasn't treated any better as the Sooners rattled off second period goals from Martin, McKinney, Chad Hudson and Alex Jacobs to put the game completely out of reach. In all, OU was 4-of-6 on the power play after converting on the first four attempts.

Goaltender Nick Holmes stopped 19 of 21 for the Sooners in a largely stress-free outing. 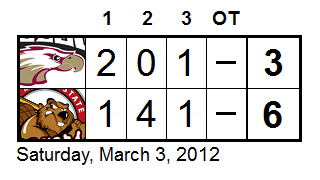 Seventh-seeded Minot State rallied from an early 2-0 hole against Robert Morris (IL) to win going away.

While Donald Iverson's first-period answer 1:35 after RMU scored their second was important, even more so was a dominant second period that saw the Beavers put four past Eagle goalie Andy DiCristofaro. Danny Urban tied the game on a rebound goal at the 7:07 mark, and markers from Cam McGeough, Josh Rutherford (on the power play) and Michael Jordan in the last 3:15 of the middle period put Minot firmly in control of things.

Robert Morris did make things a little interesting late. With the Beavers laying back and trying to kill off the entire third period, Tony Domico deflected Ryan O'Connell's point shot past Wyatt Waselenchuk to cut the MSU lead to two with 9:20 left. The Eagles kept good pressure on throughout much of the period but were unable to add a fourth goal before Jordan added insurance in the final minute of play to effectively end the tilt. 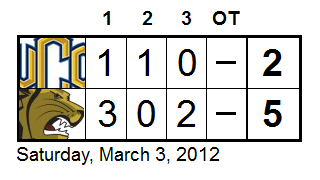 The Lindenwood Lions used bursts of offense early and late to topple an upset-minded Central Oklahoma.

When LU's Steve Brancheau and Joe Bostic scored in the first 1:38 of the game, it looked like UCO - which was coming off of a hard-earned OT win against Kent State in the opening round - might be blown out. Colin Long's power play goal for a 3-0 Lindy lead seemed to confirm that line of thinking.

But the Bronchos, as Icers fans know all too well, have an ability to hang with heavily-favored teams. Shane Khalaf answered Long on the very next shift to cut the lead to 3-1 after one period. Late in the second, UCO's Peter Kressner located his team's leading scorer, Donald Geary, coming off of the bench. Geary received Kressner's stretch pass and cashed in the resulting breakaway with a backhand between the pads of Linus Ahgren.

However, before the enormous upset could properly materialize, a bizarre twist doomed it. With 8:44 left, Lindenwood's Neeco Belanger shot on the Broncho net from center. What started as a harmless looking half dump-half shot took a tricky bounce in front and eluded UCO goalie Tory Caldwell for a back-breaking goal. Belanger added another three minutes later for the final margin.