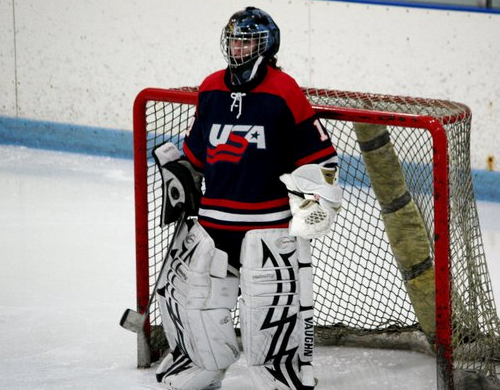 She was one of 17 named to what USA Hockey is calling a "preliminary roster," with more players to be added later this month.

Last season, en route to second-team All-ACHA Tournament and ACHA All-American honorable mention honors, Vaughan posted sparkling stats: an 8-4-0 record with a 1.40 goals against average, a 0.943 save percentage, and a shutout in helping to lead Penn State to the ACHA Division 2 national championship game. She spent her first two years at PSU with the ACHA Division 1 Lady Icers program, where she notably backstopped the team's 3-2 overtime upset of NCAA Division I Sacred Heart on January 14th, 2012. So far in 2013-2014, she has a perfect stat line, thanks to two shutout periods against Liberty in September 27th's season opener.

Vaughan also played for Team USA at the 2011 World University Games in Erzurum, Turkey, the first time USA Hockey sent a women's team to the tournament. Alongside fellow Lady Icers Heather Rossi, Lindsay Reihl and Denise Rohlik, she went 2-1-0 in four games, including a 1.81 goals against average and a shutout to help the Americans to fourth place. Vaughan is one of just two returning members of that team, as she's joined by Robert Morris (IL) forward Ramey Weaver in that category.

Team USA, it was previously announced, will be led by long-time Penn State hockey coach Mo Stroemel, who has served as director of operations for the NCAA women's team, as both an assistant and a head coach with the Lady Icers and the ACHA Men's Division 2 Ice Lions, and also as an assistant with the ACHA Men's Division 1 Icers. He was the head coach of the 2011 U.S. World University Games entry as well. Stroemel will be assisted by Rob Blackburn and Kristen Wright, the head coaches at Michigan and Colorado, respectively.

There are other Penn State connections to the WUG as well. Massachusetts defender Paige Harrington, who played for the Lady Icers in 2011-2012 before transferring, is on the women's preliminary roster. Former Icers head (2006-2011) and assistant (1997-1999, 2001-2006) coach Scott Balboni will lead the men's team at the tournament.

Here is the schedule Stroemel, Vaughan, Harrington and the U.S. women's team face, with all games being played in a 1,672-seat rink in Pergine Valsugana, a municipality within the province of Trentino in northern Italy. All times are Eastern.