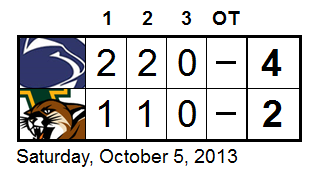 Building on an extremely strong showing in a season-opening 3-3 tie with Vermont on Friday night, Penn State (1-0-1) took the next step on Saturday afternoon with a 4-2 victory over the Catamounts (0-1-1) at UVM's Gutterson Field House.

To tell the truth, there wasn't much to set the win apart from the tie (other than the scoreline, of course) as many of the game's themes were reruns from the front half of the series. But just to review...

Vermont scored five goals on Penn State this weekend. After four of them, the Nittany Lions scored next. And those answers came after just 2:11, 0:27, 4:58 and 0:06, with the latter two on Saturday. After Gina Repaci's bouncer through traffic from center point put UVM ahead just under seven minutes into the contest, Kelly Seward answered with a bar-down bomb from just inside the line at the 11:49 mark. Laura Bowman, however, decided that wasn't good enough. Twelve seconds after Seward tied it up, she broke the tie by finishing a faceoff win and Hannah Hoenshell's rush-and-pass at the back post.

In the middle period, UVM received a second goal from a blueliner 3:48 in when Dayna Colang stepped around Shannon Yoxheimer up high before burying to re-knot the contest at two. But Hoenshell - who played arguably the best game of her career - had a lighting-fast reply when she dangled down low off of the draw and tucked the puck past Roxanne Douville.

Bottom line: PSU has always been a tough team, but they now have the skill to make it count on the scoreboard.

It was clear on Friday that the newly-assembled unit of Amy Petersen, Bowman and Hoenshell would provide a viable second scoring line this season. However, it didn't show up in the stats immediately, as usual suspects Shannon Yoxheimer and Taylor Gross were the offensive stars. In the rematch, however, the goals came from the less-familiar sources. Hoenshell had one, plus two assists to first-star-of-the-game Bowman. After the Texan countered Colang to put the Lions back ahead, the Minnesotan once again went back post from a centering feed to supply some breathing room with 2:38 left in the second period.

Bottom line: Penn State received seven goals over the weekend, the most of any NCAA series against a major-conference team, and now present exponentially more matchup problems for opponents.

Josh Brandwene may have raised a couple eyebrows by starting Celine Whitlinger after Nicole Paniccia's stellar outing Friday, but the sophomore more than answered the bell with 37 often-spectacular saves and her second career win.

Although Penn State held a two-goal lead into the third period, it certainly wasn't an easy close-out. The Catamounts launched 16 shots on Whitlinger in the 20 minutes, including one near the halfway mark that bounced through the crease and ended up with just about every blue-clad player on the ice laying on top of it. A video review followed, but after a lengthy delay it was determined that the puck never fully traversed the goalline.

Some of the unsung heroes in the win were players who are both well-known to Penn Staters but also much better than a year ago. The defensive tandem of Jordin Pardoski and Sarah Wilkie is developing into a legitimate shutdown pair, and both were instrumental to PSU's lead protection efforts. Lindsay Reihl and Paige Jahnke also had great games on defense. Jenna Welch and her linemates made the tough plays, while Emily Laurenzi was all over the ice at times.

Bottom line: As fantastic as the freshman were in their first two college games this weekend, the bulk of this team is still in the sophomore class - and they've shown unreal growth from year one to year two.

Up next, this dangerous-looking pride of Nittany Lions travels to Hamden, CT for a two-game set at Quinnipiac. They'll make their long-awaited Pegula Ice Arena debut the following weekend against Union.

Here's the live blog from a fantastic couple hours at the Gut: