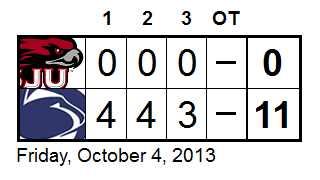 Following up their pair of blowout wins over ACHA Division 1 Indiana (PA) to open the season, the Ice Lions did something even worse to Saint Joseph's to open their Mid-Atlantic College Hockey schedule with a win at Pegula Ice Arena Friday night.

Ryan Urban got things started just 40 seconds from the opening faceoff, and the goals came even faster after that - by the 1:45 mark of the first period, it was 3-0 PSU thanks to Taylor Vincent and Abe Edson. Edson would complete a hat trick with goals in each of the final two periods while adding an assist to Peter Daley's 6-0 goal midway through the second, while Urban added a second goal and an assist on Spencer Svoboda's third-period power play snipe. Svoboda, in addition to that marker, added a couple of helpers during the stat-padding affair. 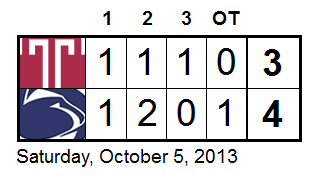 Chris Dinsmore's slapper from the dot boosted the Ice Lions to a 4-3 overtime win over MACH rival Temple the next day in Penn State's toughest test of the season to date. With the victory, PSU climbed to 4-0-0 overall and 2-0-0 in the MACH North Division.

Tim Acker gave the Ice Lions a 1-0 lead midway though the first period, but he was answered just 32 seconds later on a breakaway by the Owls' Steven Luongo. Temple went ahead in the second when Joseph Pisko slammed home Stephen Kennedy's rebound, but a holding call to TU moments later helped Urban re-knot the contest off of Acker's setup. Late in the second period, during a 4-on-4 stretch, Acker collected his third point and second goal to put Penn State back ahead into the third period. Once more though, the trailing team had a reply thanks to the Owls' Phil Vassilev with 6:23 remaining in regulation.

Grad student Ryan Fullerton, who previously played at Bryant University in Smithfield, RI, turned in a sound effort between the pipes.

Next up, the Ice Lions will head to the ACHA Showcase in Kalamazoo, MI this weekend to take on power programs SIU-Edwardsville, Michigan State (the defending national champs) and Grand Valley State.

Note: Apologies for the fact that I've neglected the team at Penn State Harrisburg in these updates - despite my best efforts, I simply can't locate anything out there about them. If you have any information, or at least know where I can find it, let me know in the comments and I'll add them in.

The Blue Lions bounced back from a tough two losses in three (one coming in overtime) weekend to blow past both Cortland State and Lehigh. In the win over the Red Dragons, a tight 2-2 game early in the second period was blown open by consecutive goals from Chris Cashin, Tyler Lantz and Tommy Demusis - then followed by five more from Berks in the third period after Cortland had trimmed the score to 5-3 late in the second. Larry Barretta, who already has nine goals and 15 points this season, scored twice to help seal the follow-up in Bethlehem the next day.

Following their riveting season-opening win over IUP at Galactic Ice, Toontown headed down to Virginia for a series with George Mason. In the opener, Jeff Nelson clicked for two goals and an assist, while Ben Kinch added a pair of helpers in addition to his own tally. Nick DeLaurentis had a pair of goals as well, with Adam Badorrek and Conlan Sodrosky scoring the others. Freshman goaltender John Travis got the win in his first career start. The rematch featured many of the usual suspects starring offensively: Kinch scored twice and Nelson and Sodrosky each got one, as did Steven Fedena and Luk Devorski.

While few would confuse W&J with Oklahoma among D1 programs, Behrend was still very impressive in securing a pair of road wins against a team two divisions up. On Friday, PSUB took a game tied at three after 40 minutes and outgunned the Presidents in the third period to win 7-5. The next day, Sam Stroud's shutout was supported by a Justin Leonard hat trick as well as two goals from Jared Bagnato.

Perennial ACHA regional tournament participant Brandywine is off to another great start thanks, most recently, to a pair of 7-3 wins over the weekend. The first, against Alvernia, was the team's DVCHC opener and powered by four goals from senior and Archbishop Wood graduate Drew Haber as well as a goal and three assists from Billy Gregg.
Posted by Kyle Rossi at 12:01 AM