With the continued government shutdown leaving it unclear whether Army will be able to travel to Penn State on Friday to play in the first NCAA game at Pegula Ice Arena, College Hockey News' Mike McMahon is reporting that the PSU brass is sick of sitting and waiting (1, 2). 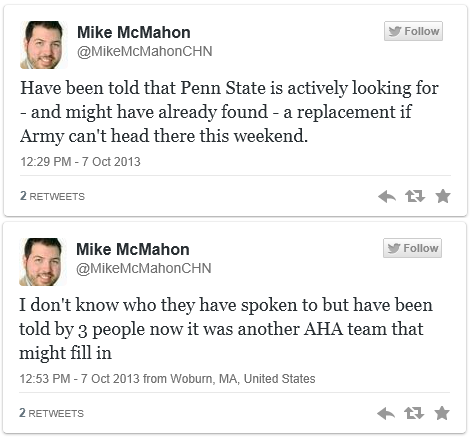 Yeeeeeah...probably a good idea at this point. The major sticking point, however, is that every Atlantic Hockey team has filled its NCAA-allowed maximum of 34 games this season. That leaves two fronts for attack:
As always, stay tuned. Hopefully that's a light at the end of the tunnel we're seeing - either way, this news certainly beats monitoring Congress and Department of Defense bureaucrats.

UPDATE 10/8 7:45 A.M.: According to Buffalo Business First, Canisius has lined up as a possible replacement, thanks largely to their shared ties with Terry Pegula. Pegula, of course, is financing the presently under-construction HARBORcenter ice rink project in Buffalo, and the Golden Griffins will relocate there upon its completion next year.


“There has been some preliminary discussions,” confirmed Jason Venisky, Canisius associate director of athletics communications. “We will have to make a final decision by Wednesday.”

One interesting aspect to the story is that Canisius has applied to the NCAA for a special waiver that would allow them to add a game to their schedule without dropping one - a move that would put them over the NCAA game limit of 34. Could the NCAA wind up doing Penn State a bit of a favor to help the school pull off its varsity ice arena opener? That in and of itself would be quite a story.

The Golden Griffins, who went 19-19-5 a year ago and qualified for the 2013 NCAA Tournament by winning the Atlantic Hockey tournament title, are available on Friday but have to head back to the Buffalo area on Saturday for a game at Niagara.
Posted by Kyle Rossi at 1:49 PM