Patrick Koudys has been somewhere no Nittany Lions player - not even former Minnesota Golden Gopher Max Gardiner - has been: the NCAA Tournament. He did so on a 20-13-5 RPI team in 2010-11, and although it was a quick trip (the Engineers were blanked by North Dakota in the regional semifinal round), Koudys' experiences as a key member of a good team should prove valuable to what is still a young PSU squad. The 2009-10 teammate of Luke Juha with the CCHL's Burlington Cougars parlayed his freshman success into being picked by the Washington Capitals in the fifth round of the 2011 NHL Entry Draft, but he elected to transfer after seeing his playing time cut as a sophomore. Koudys spent his sit-out year with the USHL's Muskegon Lumberjacks and put up a goal and 14 assists in 64 games. More importantly, he was a vital part of the league's second-stingiest defense, as the Jacks only allowed 2.73 goals per game en route to a playoff bid after finishing dead last in the Eastern Conference during the season before Koudys' arrival. 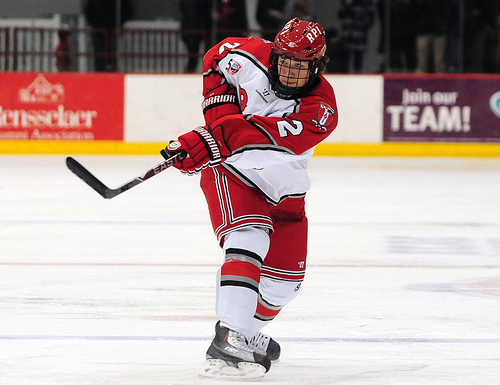