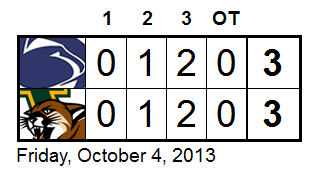 
An opening tie this year matched up against an opening win last year? Please don't think of it that way.

The simple reality of the situation is this: that historic NCAA-era opening win against Vermont was an outlier. Penn State managed five goals in that contest, then didn't score more than three in a game over the rest of the season other than against NCAA Division III Chatham and Sacred Heart, a DI team in name only.

While it's impossible to project things over all of 2013-2014 based on a single evening, right now, the Nittany Lions look like a much better team than a year ago. The signs are everywhere.

After a scoreless first period, Penn State took a 1-0 lead 6:28 into the second period just nine seconds into Sarah Kelly's hooking penalty. On the play, Shannon Yoxheimer threw the puck up to Jordin Pardoski at the point. The newly-minted alternate captain bombed UVM goalie Roxanne Douville with her heavy shot, and while Douville did make the save, the puck wound up behind her and just in front of the goal line for several agonizing seconds. Enter freshman defender Kelly Seward, the first to see the loose biscuit, and therefore the first goal scorer for Penn State this year.

It was a rather important power play goal for a team that only scored 17 of them all last season.

On the other side of the ledger, a PSU penalty kill that allowed opposing tallies 23.4 percent of the time last season went into lockdown mode. An early too many players on the ice call against the Lions went unpunished. As did two tripping calls, two checking calls, an interference call and an elbowing call over the first 40 minutes. The Catamounts did eventually solve the PK unit, on a Brittany Zuback rebound goal off of Amanda Pelkey's hybrid centering pass-shot that gave UVM a 3-2 lead with 4:04 remaining in regulation. Nevertheless, things could have gone much worse in that department.

But that leads us to something else that feels different this season. The Nittany Lions were always a resilient bunch, but didn't always have the horsepower to make that trait pay off with goals. It looks as if they do now. Just 27 seconds after Zuback scored that go-ahead goal, Yoxheimer took Lindsay Reihl's pass, powered down left wing, then sniped over Douville's shoulder. Earlier, after Pelkey's spectacular one-on-one goal gave Vermont a 2-1 lead a couple minutes into the third period, Gross provided a quick answer. Yoxheimer again started that play down left wing, and centered to the blue paint. Douville stopped Gross' initial shot, but after some persistence and a survived video review, the score was tied for the third of four times.

There was plenty of the familiar. Yoxheimer had a three-point evening and tied for the team high with four shots. Gross also had four shots and was perpetually dangerous. Nicole Paniccia was her usual spectacular self in making 35 stops. Emily Laurenzi, Sarah Wilkie and Birdie Shaw all played their roles particularly well this time out.

At the same time and as expected, freshmen Laura Bowman and Amy Petersen paired up to play in just about every situation and offered the promise of a second consistent scoring line. Sarah Nielsen, another first-year player, stepped in between Yoxheimer and Gross seamlessly. Seward had her goal, but also showed how her length will limit the opposition's trips to the middle of the ice this season.

So yeah, it was a tie. But right now, it feels like a win, because it looks like plenty of the sort of victories that count towards the season record are about to follow.

Here's the live blog from a wild evening in Burlington: