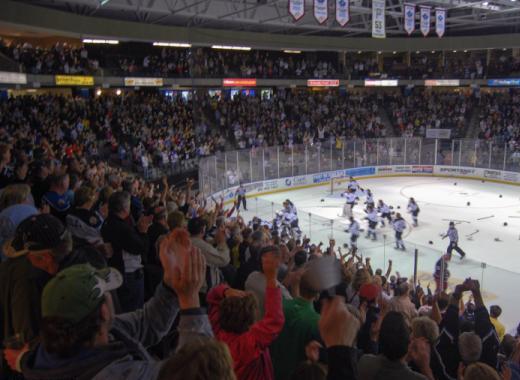 Just over two weeks after taking the Fred Page Cup as BCHL champs, the Penticton Vees, including 2012 forward Curtis Loik, have added to their trophy case. The Vees took home the Doyle Cup (symbolic of Canadian Junior A Pacific supremacy) Friday night with a game five series-clinching 6-2 win over the AJHL-champion Brooks Bandits. The Vees will now head to the Royal Bank Cup in Humboldt, Saskatchewan, where they're slated to face four other title-holding teams for the Canadian Junior A national championship. That tournament begins May 5th.

During the series with Brooks, Loik had an assist in a 7-2 game one Vees romp, then scored in game three, the only game Penticton lost in the series. On the goal, Loik capped a dominant shift for his line by going between the legs of a Bandit defenseman and popping it past the goalie. The tally gave the Vees a 2-0 lead in the second period before Brooks rallied with four of the game's final five goals.

The Bandits, of course, feature 2012 forward Reed Linaker, who recovered from a December knee injury in time to play in the first two games of the team's AJHL championship series. In the Doyle Cup, he played in games three, four and five, running up 10 penalty minutes.

Penticton becomes the final team to have its name engraved on the Doyle Cup, as a format change next year will see the champions of the junior A leagues in British Columbia, Alberta, Manitoba and Saskatchewan compete for the Western Canada Cup. It's both the first and last Doyle Cup for the Vees, as they lost the 2008 Doyle Cup to the AJHL's Camrose Kodiaks in their only other appearance.

Other than Linaker's and Loik's titles, 2013 goaltender Eamon McAdam and 2012 forward Casey Bailey remain alive for the USHL's Clark Cup championship (they're facing each other in the Western Conference semifinals, with McAdam's Waterloo up 2-1 in the best-of-five series). On the women's side, 2012 forward Hannah Hoenshell won the USA Hockey Tier II 19U national championship with her Alliance Bulldogs team on April 1st and 2012 forward Shannon Yoxheimer won the JWHL with NAHA, while 2013 forward Amy Petersen won a second straight Minnesota high school AA title with Minnetonka this year.
Posted by Kyle Rossi at 12:57 PM