3. Gadowsky says identity players are most important for Icers
(The Daily Collegian)

Sometimes it's tough to give the Collegian their due for the great work they're doing this year (on the men's side, anyway) because articles frequently become dated after the games over the weekend and before I run these posts on Mondays. Grinders, shot blockers, leaders and faceoff guys, however, never get dated.

PA Puck took a break from writing about the Hershey Bears' use of foam rollers to cover another team beyond the cursory "give the scores on Monday, and Mercyhurst had a couple CHA players of the week." Crazy, I know. The subject: new Icers Hall of Famer Steve Penstone.

First star goes to the Ice Lions, who beat Pittsburgh 4-3 Friday and Monmouth 9-0 Saturday to improve to 24-2-0, a record that includes an active 19-game winning streak. It wasn't easy though, particularly in that first game.


The Ice Lions, ranked No. 2 in the ACHA DII Southeast Region, found themselves trailing 3-0 to the No. 12 Panthers seven minutes into the second period. At that point, head coach Josh Hand made a goalie change to Ryan Demuth, and the Lions roared the rest of the way.

Mac Winchester fired a shot into the top corner of the Pitt net to trim the Panthers’ lead to 3-1 and set up another goal as the Lions closed to 3-2 at the second intermission.

Chris Lewis and Austin Wagoner scored in the third period to complete the comeback. No such drama was necessary the next night as PSU rolled to an easy senior night win.

The Ice Lions will next play St. Joseph's at home on Saturday. But more importantly, votes for the next D2 ranking are due that day. The significance of that particular poll is that the top two teams in each region earn an autobid to the ACHA national championships, while teams ranked 3rd through 10th play off February 24th-26th to determine the other half of the sixteen entries. Penn State, given its current position as the southeast's No. 2 team, its recent spotless record, and its head-to-head win over southeast No. 3 UMBC (3-1 on December 2nd) seems to be a lock to qualify for nationals. 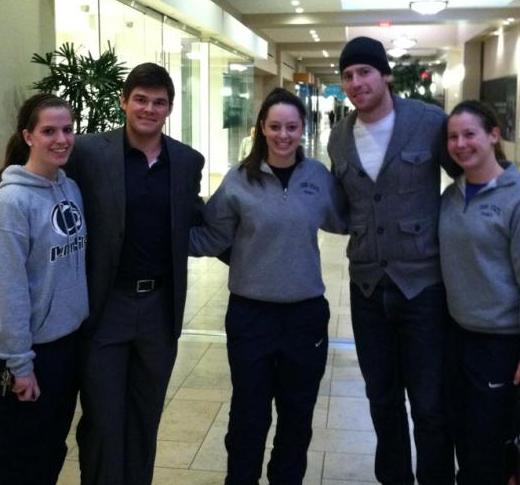 Lady Icer fans Chris Kunitz and James Neal were at Boston's Prudential Center over the weekend. They ran into Jess Desorcie, Cara Mendelson and Tess Weaver, who graciously agreed to take a picture with them.

It's nice to know that former Warriors Jill Szandzik and Gina Buquet are able to play out their college careers at one-time College Hockey America rival Mercyhurst. Others weren't quite as fortunate after the WSU program was ripped out from under them last May.

Well, there you go. The NCHC, the conference formed solely to attract a television deal, will be on a channel I don't get at least 18 games per year. And allegedly, the conference is paying for production costs. Congrats, guys.

More than anything I think, the NCHC was guilty of overestimating its value to broadcasters before nuking the college hockey landscape. Hockey people look at the conference and see some great programs. But most people look at the conference and see MAC teams, branch campuses, schools they've never heard of, and North Dakota. Fair? Probably not. But it's the hard reality of the situation. Hockey on TV in the U.S. has always been an uphill battle. Hockey played by Colorado College and St. Cloud State on TV in the U.S. is close to impossible.

Before you write off my opinion as Big Ten homerism, please note that I've questioned how lucrative hockey on Big Ten Network will be as well. 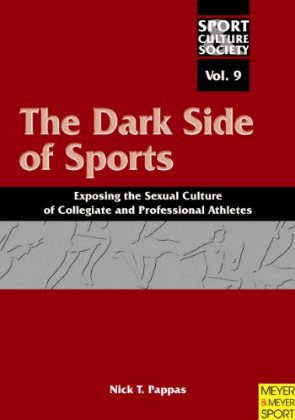 The Dark Side of Sports: Exposing the Sexual Culture of Collegiate and Professional Athletes
(amazon.com)

Former Icer Nick Pappas wrote a book that promises to be a pretty engaging (and topical) read.


Elite-level athletes are placed upon heightened pedestals in societies world-wide. At the same time, there is a dark side to these glorified competitors that remains hidden from those outside of exclusive athletic circles. Dr. Nick Pappas' athletic background in collegiate and professional sports has provided insider access, enabling him to uncover an array of disturbing sexually deviant and aggressive behaviors, which have silently thrived for decades in many athlete cultures. These findings, expressed through the athletes' own words, are the result of more than 10 years of cutting-edge research involving in-depth interviews with 142 collegiate, minor, and major league athletes from five prominent U.S. sports.

PSU lost out on the son of Edmonton Oilers general manager Steve Tambellini.


Vernon Vipers (BCHL) forward Adam Tambellini took an official visit to North Dakota during the series with Minnesota and liked it enough to the point where he decided Grand Forks was the best place to continue his hockey career. He’ll enroll either next year or in 2013. Tambellini is third on the Vipers in both goals and assists, and picked UND over Minnesota, Michigan and Penn State.

Ex-Icer Tim Carr played in his second game at NCAA Division III Western New England College on January 28th. Starter Eric Sorenson was run from the game early after allowing three goals on Nichols' first seven shots, but Carr settled things down in relief by stopping 32 of 34 shots in 52:35 of action.

Since it's now the week leading up to Icers alumni weekend, here's Hall of Famer Don Coyne with Jaromir Jagr at the Pittsburgh Penguins' 1999 training camp. 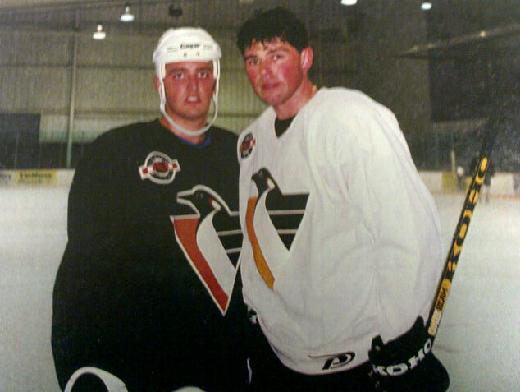