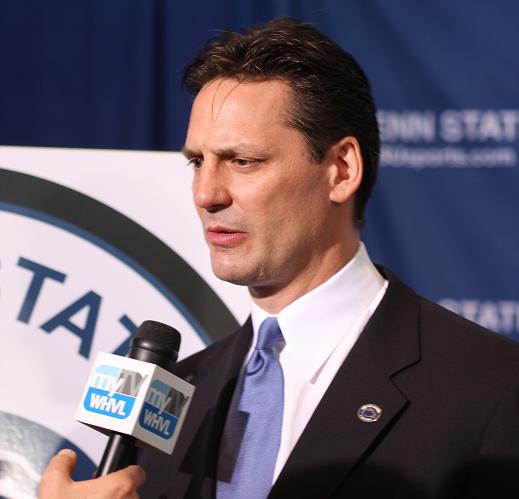 Can you say anything about Bryce [Johnson] in his first game back? How do you think he looked out there?

His speed hasn’t changed. I think if you asked him - I don’t want to speak for him, but if you asked him, his timing might be a slight bit off, but he sure hasn’t lost any speed, and that’s tough to stop. I thought he played well.

And how do you think that line played? Was it the way you were expecting out there?

Not yet, but I think it will be. I think you can see that, even [Michael] Longo on that line, he had speed and was also really tough to the net. When you have Longo doing his job and going to the net and those two [Johnson and Taylor Holstrom] flying around, I think they’re a pretty tough line to stop.

How do you think Mike [McDonagh] fit in with Tommy [Olczyk] and Justin Kirchhevel?

Really well. It’s the same deal. He goes to the net, he’s tough to contain, and it sort of allows them to pick up space. I mean, it’s just one game, but I’m encouraged at what I saw with those two lines.

You mentioned yesterday that you weren’t sure if you were going to be starting Matt [Madrazo] tomorrow...

Were you impressed with P.J. [Musico]’s play today?

Even though [the Mercyhurst goal] was a breakaway, I think he wants that one back. I’m sure if you asked him, he’d say that. But yeah, he only had I think it was 16 [shots against him]? If you give up one, you can’t be upset with that. But he’d want that one back.

[Jake] Friedman hadn’t scored since December 3rd. Have you talked to him about this?

No, the thing is, and you do watch our practices, I think he’s consistently one of our hardest workers. He probably scores as much as anybody in practice. He works really hard at it, he shows us a lot, he’s got a great attitude, and he’s one of the guys that you just hope that it’s going to come. It certainly wasn’t from lack of effort. He puts the work in in practice. I’m very happy to see it, but hopefully this will open the floodgates for him a little bit.

How big was it to answer that shorthanded goal quickly?

Yeah, you know what? I don’t know, because at the time, I think shots might have been 10-1 or 9-0, and I thought we were playing really well. I thought we were changing quickly, I thought we got everybody involved, and I felt good. And then we give up that goal, but I didn’t feel like ‘oh no,’ if that makes any sense, but certainly, by responding that quickly I think it gave everybody a pretty confident feeling.

Doing anything differently for tomorrow with how Saturdays have gone?

I thought tonight [Eric] Steinour’s line was excellent and we’re going to give them the night off tomorrow.

Who is going to replace them?

We’re taking [Ryan] Seibolt out as well, so replacing those four guys is going to be [Dan] Meiselman, who is cleared to play as of yesterday, [Forrest] Dell, Dom [Morrone] and [Tim] Acker.

Can we put it on the record that [Meiselman] had a concussion?

Yeah, I guess so. Head injury.

This is your first alumni weekend here. What does it mean to you to have all those guys back in and learn a little bit about the history and things like that?

I know a lot about the history, but I haven’t met a lot of the faces. So I’m really looking forward to meeting the guys and certainly through their success and effort is why this coaching staff, why we have this great opportunity to come here, so I really want to meet them.

Feel any pressure this weekend to put on a good show for the alumni?

I think we definitely want to play well, but I have confidence in our team. I don’t think we feel extra pressure, I think the guys are pretty internally motivated. Certainly they want to put on a good show for them, but any time we play here, we have pressure on ourselves to perform.

Will you be involved in the alumni game in any way?

Do you mean ‘will I be playing?’ [laughter]

Or coaching, or on the bench...

I will be a spectator. [laughter]

Do you have any pregame rituals or superstitions?

How long have you been doing that for?

Goalies are weird like that, they probably don’t want that either.

I actually think they don’t want to look at me, so I figure it’s only fair to be reciprocal.

In the locker room and stuff?

Anywhere. Before the game, the starting goaltender, I don’t like looking at him.
Posted by Kyle Rossi at 1:28 AM