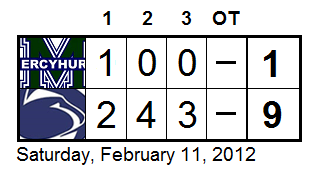 An early power play goal from Tommy Olczyk finishing a beautiful passing play paved the way for the Icers (25-3-1) to roll over Mercyhurst (19-10-2) for a second consecutive game Saturday afternoon and finish an alumni weekend sweep. Olczyk notched a second goal just seven seconds into the middle period off of a misplay by Lakers goalie Ian Ansel, and Bryce Johnson made amends for several close calls Friday night by adding two of his own to go with an assist. As has become standard fare this season, Penn State answered the Lakers' only goal within 10 seconds five minutes into the second, and also scored two within spans of 12 seconds (late in the second) and 1:32 (early in the third).

That second sequence of quick strikes was made possible by a slash on Justin Kirchhevel from MU's Edward Barca, one example of pervasive late-game chippiness. Barca received a major penalty for the incident, and Kirchhevel did not return to the game.