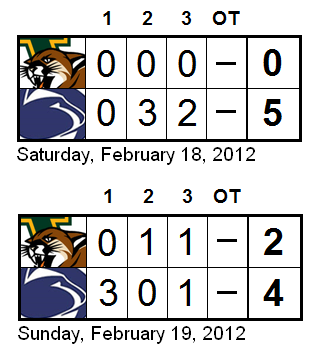 It's often said that when adversity hits, it's not the situation, but whether we react or respond to the situation that's important. Put another way, champions respond to and overcome the setback.

Call the Lady Icers champions, in more ways than one.

Just days following an inexcusable snub by the ACHA coaches that shut Penn State out of the national tournament, the team very easily could have played out the string and mailed in a couple of lackluster performances against lowly Vermont. Instead, they chose the route of champions and as a result are quite literally that as this year's winners of the ECWHL regular season crown following a sweep of the Catamounts.

On Saturday, an uneventful first period saw only one killed penalty for each team and ten total shots, but it was merely a prelude to a second-period PSU explosion. Three goals - from Taylor Gross, Katharine Gausseres and Tess Weaver - over a span of 5:31 were more than enough for the win, thanks to Katie Vaughan's second full shutout of the season on 20 saves. However, Jess Desorcie had not yet popped in her customary two goals per game, so she did just that in the third to round out the scoring.


PSU's big scoring line (which totaled 13 points for the weekend) didn't wait quite as long to crank things up in Sunday's Senior Day tilt. By the 13:14 mark of the first period, Gross had already scored twice, with Weaver assisting on both. Shortly after, Paige Harrington's spectacular end-to-end rush made it 3-0 by the intermission.

Much like the first game, however, the first period did not predict the second. Suspense briefly re-entered the match when the Catamounts' Hope Simpson chipped the PSU lead down to 3-1 late in the middle frame, but she was quickly answered by Lindsay Reihl 1:54 into the third period. That insurance proved enough to withstand a late goal from UVM's Riley Fontaine.

The sweep parked the Lady Icers' conference record at 7-2-1, a single point better than second-place Rhode Island. Penn State will attempt to become dual champions of the ECWHL at the conference's playoffs on Saturday and Sunday at URI's Brad Boss Ice Arena. With each of the other three participants (URI, third-place Northeastern and fourth-place Massachusetts) also holding a bid to nationals (which, of course, eluded PSU), the usual satisfaction of victory would certainly be multiplied.

After that, we've unfortunately reached the end of the line for this season - and the end of the careers for Chelly Deiling, Sara Chroman, Abby Miller, Kassidy Augustine and Lydia Scott, this year's senior class. Whatever heights are ultimately reached by the coming NCAA program, it needs to be known that this group laid a solid foundation for that success, both on and off the ice. Congratulations and best wishes to each student-athlete!