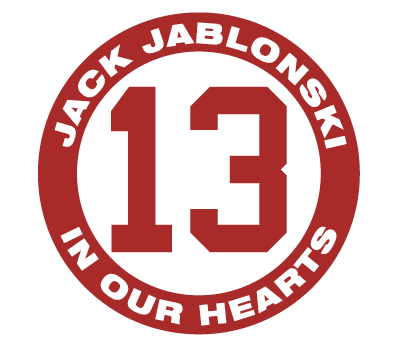 The Ice Lions have announced that fans attending Saturday night's game against Monmouth, scheduled for 10:15 p.m. at the Ice Pavilion, will be charged "admission by donation," with all proceeds going to The Jack Jablonski Fund.

Jablonski, as is well known by now in the hockey community, played at Benilde-St. Margaret's School in St. Louis Park, MN. On December 30th while chasing a loose puck, he was checked while in a vulnerable position and crashed to the end boards head first. The horrific result: two fractured vertebrae and a severed spinal cord, resulting in paralysis. While Jablonski faces a long and arduous (and, to the point, costly) recovery, he's in the right frame of mind to pull off what could rightly be called a miracle - here's how he was quoted in the St. Paul Pioneer Press on January 28th:


There is no doubt in my mind that I will walk again. I don't know how it's going to work or how far down the road it will be. I'm going to walk, and I plan on skating at least once. To skate is very important to me. The fact and maybe the realization that I could never play hockey again is kind of shocking to me. I feel like that just can't happen. There's no way that's going to be. I don't know how or when, but I know I will do all that eventually.

Here's hoping for a great crowd of Penn Staters doing the Penn State thing and making an impact.

As great of a cause as that is, it's certainly not the only reason to head to the Ice Pavilion. It's senior night for the Ice Lions as well, meaning that the fantastic outgoing class of Ryan Seifert, Jim Recupero, Ryan Gannon, Albert Juliano, T.J. Laessig, Tom Badali, and Sean Davis will be honored. Those seven players have been integral to a team that has ascended into national championship contention this season.


In fact, attendees might also see PSU all-but-officially clinch a spot in the ACHA national championships. The Ice Lions are presently ranked second in the southeast region, and if they manage to hold that position through the February 11th poll, they're automatically in. The team hasn't lost since October 9th (a 17-game winning streak) and owns a head-to-head triumph over UMBC (the southeast's no. 3 team). It therefore seems highly probable that wins in the Ice Lions' next two games (at Pittsburgh Friday and against Monmouth) will be enough to get the team to the 16-team tournament in Fort Myers, FL from March 16th through 20th. PSU does play one final regular season game against St. Joseph's on February 11th, but the poll votes will have already been submitted by then.

To summarize: there's no good reason not to get to the Ice Lions game Saturday. So get there.
Posted by Kyle Rossi at 11:44 AM