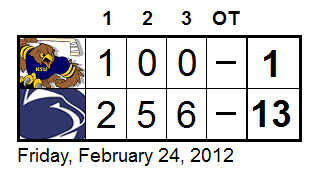 The last Icers game at the Ice Pavilion ended the same way as numerous others - with Penn State (27-3-1) on the right end of a lopsided score against an overmatched opponent. The victims this time around were the Kent State Golden Flashes, and it's probably fair to say that this affair was even less competitive than the score. PSU's 13 goals trumped KSU's 12 shots, with Justin Kirchhevel, Bryce Johnson and Tommy Olczyk each scoring twice. Kirchhevel and Mike McDonagh tied for the team lead with five points each and in all, 17 of the 19 dressed skaters notched points (only the defensive pairing of Rich O'Brien and Dan Loucks was shut out).

In 562 games at the Greenberg Ice Pavilion since its opening on January 16, 1981, the Icers went 466-65-18-13, a record that includes wins in the last 21 games. PSU will now hope that neutral ice is equally friendly, as the ACHA national championship tournament in Strongsville, OH March 2nd through 7th is all that remains of the season and the Icers era.