End of the Road (Part I) 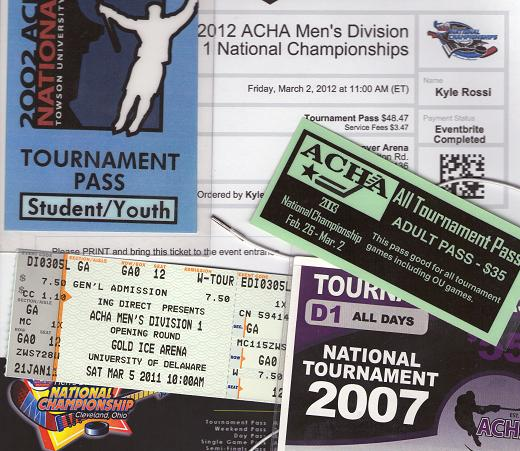 Part one of a three-part series previewing the ACHA Division 1 national championship tournament.

At some point within nine days of today, the Icers will be no more. Stop and let that one sink in for a moment.

In an instance of less-than-perfect symmetry, the Icers' history will not end at the Ice Pavilion or even arenas Bird, Brad Boss or Fred Rust. Instead, the site will be a venue in which Penn State has never played - the Hoover Arena in Strongsville, OH, site of the 2012 ACHA Division 1 national championship tournament. Following one of the tournament's games (hopefully, the last one), PSU will exit the ice, along with the ACHA, and the NCAA era will officially be underway.

So let's learn a little bit about the showcase that will serve as the Icers' official farewell. Who else will be competing, you ask? With the field expanded to 20 teams this season, it's probably easier to talk about who won't. Of teams which played for the title in 2009, 2010 or 2011, it's a pretty brief list, most of which is based in the Keystone State: Penn State Berks, Canton, Duquesne, Real Robert Morris, Slippery Rock, Stony Brook, West Chester and, of course, Rhode Island, the only certifiable big fish of the group. Also not present, thankfully: consolation games.

Just about every other ACHA Division 1 program that matters will be there. Those seeded 13th through 20th will play each other on Friday, with the winners meeting the top 12 for a round of 16 on Saturday. Saturday's victors advance to Sunday's quarterfinals, and following an off day Monday, the semifinals and championship game will be on Tuesday and Wednesday.

In a manner similar to last year (Part I, Part II), I'm going to frame my tournament preview around predictions, although I'll split this one into three due to the enlarged field. Last year, I got the final four correct. This year, I'll try to not screw it up from that point. For this first post, we'll get warmed up with Friday's largely dispensable first round, featuring a few teams that would not be here under the old system.


Straight away, Mercyhurst has never won an ACHA tournament game of consequence, and I don't see that changing this year in their first appearance in six years. Many of you saw them at the Ice Pavilion a few weeks ago, and while they can be dangerous generating turnovers on the forecheck, the ECHL champs were clearly unable to compete with a Penn State, or for that matter...

Oakland on the other hand, despite being fairly new to Division 1 (after a nice run in D2, including a pair of national titles) have become well entrenched. They Will McMahoned the Icers to a championship in their first season at the level and have since established themselves as a solid program that makes the show most years, even if they haven't come close to duplicating the success of five years ago. This season's team is probably on that same type of trajectory despite being the regular season champs of a tough GLCHL that includes defending champ Davenport and Adrian. Here's OU coach Jeremy Bachusz on what to expect from top scorers Anthony Colizza and Billy Balent, along with the rest of his team.

"We're a puck possession team in the offensive zone. That is what we do best when we are able to establish our forecheck. Defensively we have been working on trying to transition the puck out of our zone a lot faster then we have and try not to bring the puck back in because that is where we get ourselves into trouble. We have definitely been stressing that throughout this second half here in trying to get our guys moving forward out of our defensive zone."


Remember that time Davenport won the ACHA Divsion 1 national championship? It was last year, but it seems much longer ago in light of the Panthers' uncharacteristic struggles this year, which include a loss to Michigan-Dearborn. Seriously, who loses to Michigan-Dearborn in 2012?

It's really quite easy to explain: the team has been decimated by departures. Only defensemen Adam Gillikin, Jonathon Frank, Phil Tesoriero and Bo Jacobs, forwards Phil Wendecker, Ben Dykstra and Jeff Slusser and goalie Phil Graveline remain from the overtime win over Lindenwood in last year's title match. Even coach Paul Lowden quit to focus on his duties as athletic director at the school, leaving former assistant Phil Sweeney in charge. Not surprisingly, it's the carryover players (plus freshman forward Mason Bollinger) doing most of the heavy lifting for DU this season.

Drexel? I'd love to talk more about you, especially since this is your first nationals trip since the Icers' last championship (2003) but you haven't updated your website since last year. You also lost to the Ice Lions this season. Get under the bus. 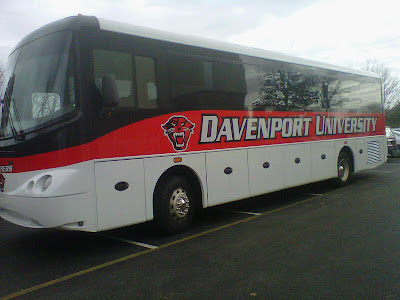 This is unequivocally the game to watch on Friday, for the simple reason that the winner will advance to play the Icers. It also doesn't hurt that it may be the most competitive of the bunch, between two programs that are most likely on their way up the ladder. I like the Mountaineers goalie, Rob Borcky, and feel like he's one of the better mid-major tendys out there. Rutgers counters with a great top line of Matthew McDonald, Jason Adams and John Beatrice.

I'll be honest though: it rubs me the wrong way that the Scarlet Knights have been nationals-bound since November, when they clinched the NECHL regular season title to go with the league's autobid. Unless dealing with the 1976-1977 Montreal Canadiens (rest assured, this Rutgers team is not those Habs), that's so early that it's suspect. Given the lowly stature of RU's league and schedule, they've really had very little incentive to win - once they got in, they were going to be seeded somewhere between 15 and 20 regardless of how they played the last three months. West Virginia, on the other hand, went 12-2-0 in the CMHA and didn't wrap things up until a three-game weekend sweep of Duquesne, Slippery Rock and Pittsburgh February 10-12. I'm going to go with the team that has needed to win games this calendar year, the one that has Lady Icer Kate Christoffersen's brother on the team (senior defenseman Matt), and the one that lost to the Icers by fewer goals in the regular season.

Central Oklahoma, as Penn State knows all too well, is a quality program capable of an upset. The reason? Despite their geographic isolation from most of the rest of the ACHA, they battle test themselves. Don't be fooled by the record - UCO has played the top five 12 times this season, and came away with two wins (the shootout win over PSU on January 6th joined a shootout win over Arizona State on October 28th). Certainly, the Bronchos will be huge underdogs if they advance to play Lindenwood, but if they do happen to sneak one out, it will be a little less surprising than an upset in most 2-15 matchups. Defense is a little bit of a concern with a team goals against well north of three, but Donald Geary (below) tends to make up for that. His 19 goals far and away lead a team that only has two players with a double-digit number in that category. 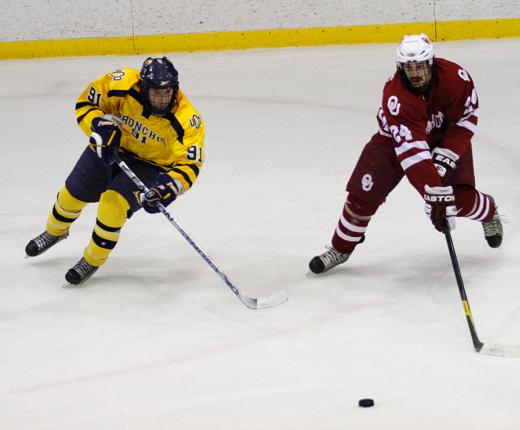 Despite Kent State's status as Akron's (my other school, for those who don't know by now) archrival in everything besides ACHA hockey, I sincerely like the Golden Flashes. With the exception of games against Penn State, I root for them every time out, which will include this game. Since I live in the area, I've been known to pop over and watch them from time to time when it doesn't conflict with the Icers or Akron's ACHA D2 team. All of that said, they have no business being in this tournament and the honorable course may have been to decline their host autobid, as similarly train-wrecky John Carroll did in 2009. Evidence? Sure. They're on a 13-game losing streak. In 23 games this season against tournament teams, they've been competitive three times. Of course, one of those times was a 4-3 win over UCO at the D1 showcase back in October. Still, pass. Andrew Gazdak and Justin Phenney will be vital if KSU is to prove me wrong.

Tomorrow, I'll toss Oakland, Davenport, West Virginia and Central Oklahoma into the second round with the top twelve to predict how that will shake out.
Posted by Kyle Rossi at 12:10 AM