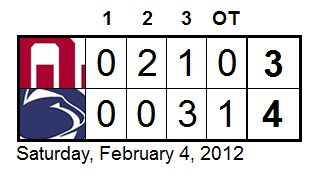 Joe Battista has seen quite a bit of hockey at the Ice Pavilion. So, when he says something like...


I've been here for a lot of great wins over the years. This will go down as one of the greatest comebacks ever in this building.

...you know this game was one to savor.

George Saad slammed home a goal off of Eric Steinour's usual gutsy effort to get the puck in front 2:07 into overtime to finish the Icers' (23-3-1) 15th straight home win, 4-3 over Oklahoma (21-12-2). Of course, Saad's goal was only the logical conclusion to a wild stretch that saw a previously comatose Icers team bury three past OU goalie Nick Holmes to erase a 3-0 deficit in the last 5:00 of regulation. Justin Kirchhevel started the rally by firing one in from the circle to Holmes' left. Sixty-five seconds later, Taylor Holstrom brought the Icers within one. Kirchhevel struck again with an empty net behind him to throw the home partisans into a frenzy with 32 seconds remaining in regulation.

Until those developments, the game looked to be defined by something altogether different: Matt Madrazo's over-aggressiveness. On two occasions, Madrazo charged well out of the crease in an attempt to play the puck, only to see Shane Vorndran pop it into a vacant net. Of course, all is forgiven now, as are Penn State's recurring power play struggles (0 for 8 in this one, including a shorthanded goal against). Arguably, it was a lack of power plays (only one penalty was called in the third period, after 12 in the first two) that helped PSU complete the comeback.

Penn State will now face Mercyhurst February 10th and 11th at home for alumni weekend - and for the final two-game weekend of the regular season.