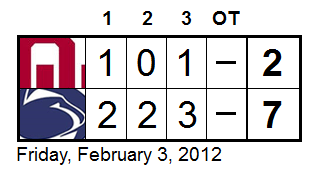 It might sound counter-intuitive considering the final score, but both Oklahoma goals made the Icers sweat. Jon Schanke's tally off of mass PSU confusion in the defensive zone gave the Sooners a 1-0 lead just 55 seconds from puck drop. With Brian Dolan in the penalty box 5:01 into the third period, Shane Vorndran put home a rebound to cut the Icers' lead to 4-2 and make a once-safe margin seem tenuous again. Even some of the close calls could have made things more interesting, such as when P.J. Musico made two of his best saves of the year in one early second period 3-on-1 sequence, at a time when a goal would have brought the Sooners within one and carrying momentum.

Outside of those moments though, this one was all Icers. Chris Cerutti and George Saad answered Schanke in short order with net-front goals in the opening stanza, while Brandon Russo and Nate Jensen added to a slim lead in the second period. Eric Steinour's two goals sandwiched a pretty effort from Justin Kirchhevel in the last six minutes of the game to create a lopsided score.