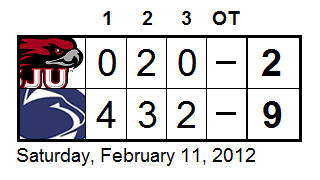 A pair of deflection goals by St. Joseph's in the second period proved to be of little concern as the Ice Lions completed a 25-2-0 regular season by dispatching their MACHA North rival Saturday night at the Ice Pavilion. Ryan Urban and Franky Reluzco scored twice, and Chris Dinsmore, Ben Snow, Chris Lewis, Fredrik Linge and Ryan Seifert all added single tallies to an extremely balanced effort - which led to a game that was about as competitive as the Ice Lions' 11-0 win over the Hawks on October 23rd.

Penn State will now head to the MACHA playoffs February 17th through 19th, although before that the team expects to learn that they have won an automatic bid to the ACHA National Tournament, which begins March 16th in Ft. Myers, FL.