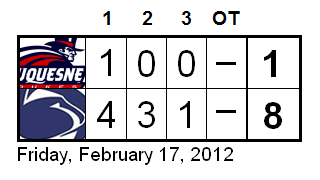 My apologies once again for having to cancel the live blog for this senior night blowout of Duquesne that pumped the Icers' record to 26-3-1 (including 18 wins in a row at home). For those who don't know, as I was packing up after watching last Saturday's Ice Lions game, I tripped over my laptop's power cord, dragging it from one of the Ice Pavilion's bench seats to the floor. The result: a cracked hard drive. Since then, all TYT updates have been done from a computer lab at the University of Akron, where I attend graduate school. I should be back up and running in the next couple of days (definitely in time to do a live blog next Friday).

In any case, TYT extends its congratulations to seniors Dan Petrick, Dan Loucks, Nick Seravalli, Kurt Collins, Chris Cerutti and Paul Daley - a group of outstanding players. As usual when the live blog doesn't go off as planned, let's defer to IcersGuy from Black Shoe Diaries (linked above) for the rest of the story.


Much like the Mercyhurst games last weekend, the Dukes provided little in terms of a challenge for the Icers. The Icers would jump out to a quick 3-0 with goals from seniors Kurt Collins and Paul Daley, along with a goal from sophomore Bryce Johnson. The Dukes would counter with a power play goal, but George Saad would make it 4-1 after one period of play. Mike Longo, Dominic Morrone, and Chris Cerutti would add goals in the second to make it 7-1 through two periods. Cerutti would add a second goal in the third period, and the Icers would cruise to the easy 8-1 victory.

The weekend went as expected - domination from start to finish. Of the healthy senior players, only Dan Loucks was unable to get onto the scoresheet for this Senior Night (Petrick picked up 2 assists). However, Dan looked solid in his return to the ice from injury, and that's the more important piece for the night. Looking ahead, it will be interesting to see what lineup Coach Guy uses in next week's game versus Kent State. The Icers can cycle through 5-6 scoring lines and 4 defensive pairings, so there are reasons to both play and scratch any player. Guy has also sat entire lines on certain nights, but sitting a top line for two weeks might be too much rest. And at the very least, Kent State is ranked and tournament-bound (if based on the technicality that they're the host team). I'd expect players trying to return to game-speed to play, but the rest of the lineup is up in the air.
Posted by Kyle Rossi at 12:30 AM