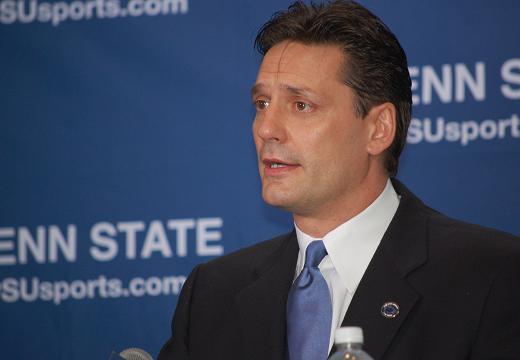 How do you think [Dan] Meiselman played?

Pretty good, for being back. I thought he was fine. I thought everyone put in a pretty good effort, and no complaints.

It was a tough game to really – sometimes the hardest part of a 9-1 game is keeping a mental focus. It’s not always the best evaluation, but I thought he looked fine.

How is his head? Did he say anything to you?

He’s fine. Obviously, we would never even chance playing him if he wasn’t 100 percent cleared. The doctors – with any injury really, but especially a head injury. That’s totally up to the doctors. We don’t even touch that.

Were you a little worried when the guy came at him from behind there, with him coming off a concussion?

If he wasn’t 100 percent, he wouldn’t have played, so he’s as fine as everybody else.

Can you say something about Bryce [Johnson] getting two today, since it’s been so long since he was on the ice?

What I really liked to see is, if you saw that 2-on-1 with him and [Taylor] Holstrom, it was a beautiful play. It looked like they had a lot of synergy; I really enjoyed watching that goal. That gives you optimism for how those guys are going to perform in the future.

That whole line did pretty good today, did you think so?

Absolutely. Two goals within [12 seconds], certainly they’re an explosive group, and I thought [Michael] Longo did a good job going to the net, he scored a nice goal. They looked like they’ve been playing together for a while.

You guys are [17-0] at home now, do you see that as a source of pride now, with only two games left?

Do you know what happened to Justin Kirchhevel?

Yeah, he got slashed on the back of the leg; it’s sore. There was no use at that time, it was 6-1 I think going into the third, and it [would have been] ridiculous for him to play. In 6-1 games, you certainly hate to see things like that happen.

You said earlier in the season that it’s hard to separate the Holstrom, [Tommy] Olczyk and Kirchhevel line, what made you do that this weekend?

We want to see if you can get two really high-tempo-powered lines. [Eric] Steinour’s line, in a different way, they have great identity and they’ve been very, very effective. I think the Holstrom-Olczyk-Kirchhevel line has been very effective too, but so has Bryce Johnson. He’s been able to score with everybody. I thought if he could find some synergy with a guy like Holstrom and Kirchhevel could still have that synergy with Olczyk, then you could really have three high-powered lines, and that’s what we’re trying to do.

What made you put [Mike] McDonagh with Olczyk and Kirchhevel compared to everyone else?

There’s a couple things. One is that Olczyk and Kirchhevel seem to have a synergy together and they were both playing the wing. So we wanted someone to play the middle, and McDonagh does a great job going to the net. And when you can go to the net well, it often opens up space for the other guys. As far as centermen go, he’s probably our best going to the net and he’s been very consistent all year, so I thought that’s why he would fit well there.

For the past couple [Friday] games, you’ve made P.J. [Musico] the starter. What made that decision?

A couple of the times, it was performance. And actually a couple of times, we honestly didn’t know who we would start, and we basically had a competition on Thursday. The winner of the competition got to choose which game they started.

Was that this Thursday?

We thought through performance last weekend [against Oklahoma], we committed to starting him Friday. Two of the past weeks was because there was a competition on Thursday and the winner of the competition got to choose, so we’ve done it a couple different ways.

Have you seen [Musico] grow as a goalie over the season?

Yeah. His practice habits – he’s a California guy, and sometimes he can be perceived as a little loose out there. I understand that, but I think his practice habits have gotten a lot better and he’s working really hard at practice. And I think in that sense, he has grown.

Do you think not having a definitive starting goalie has any effect on the team?

I think it’s a positive effect right now because I know for a fact that [the team has] great confidence in both goalies. I think that’s really good to have. If you get into a situation where you have a must game and for some reason one guy gets hurt or he is not playing well, and the other guy has to come in, if your team has great confidence in both goaltenders, I think you’re ahead of the game.

Is there a specific play or anything like that you like to set up after giving up a goal? It seems like you guys are always able to answer on the next shift.

No, it isn’t. That’s basically just credit for the guys digging down and making sure that they answer, it’s not a specific set play.

Good to get one on the power play early today?

I know George [Saad] got one yesterday too on the power play. I mean, yeah, I don’t know what the final numbers were, but I thought it looked good and it’s nice to see. I thought we had good net presence today, so what we worked on, I think we accomplished that today.

What do you feel was the turning point in this game?

Whatever the third goal was. Which one was it?

Was it the one off of the very start of the second period?

That one. I thought we were playing well, I think the shots at the end of the first were maybe 21-3, but it was a 2-0 game. And in a two-goal game, anything can happen, but I thought we were playing well. But if we relax and they come out and they get one, then it’s a totally different game. That goal with seven seconds [gone], that’s the turning point, that really solidified the direction the game was going to go.

How is Dan Loucks?