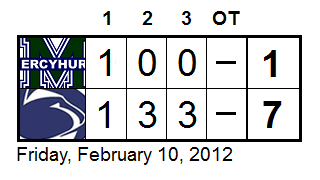 When George Saad's errant cross-ice pass while on the power play led to a breakaway goal for Mercyhurst's Doug Stanton 14:45 into Friday night's game, he and his Penn State teammates could have very easily gotten down on themselves. After all, they had dominated the early going, but all they had to show for it was a 1-0 deficit. They decided instead to make the Lakers' lead a brief one. Saad redeemed himself with a rebound goal on that same man advantage, then added another in the last two minutes of a 7-1 Icers win. Brian Dolan, Paul Daley, Jake Friedman, Nate Jensen and Mike McDonagh also scored in a game that was notable for Bryce Johnson's return to action for the first time since December 9th against Liberty.