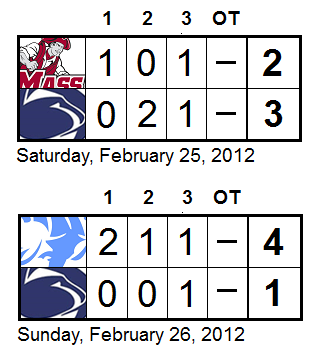 The ECWHL championships, both regular season and tournament, are decided on the ice. While some may argue that the ACHA qualifies as well through its annual national tournament, the Lady Icers' conference enjoys the following characteristics:
It sounds simple, but in that simplicity lies its beauty: win enough games and you're guaranteed to win the whole thing. We expect that reality from competitive sports, largely because real life offers plenty of ambiguity, slanted playing fields, and general unfairness. Life crept into sports and struck Penn State hard in the wee hours of February 16th, when the ACHA announced that through some inconsistent application of its stated national tournament selection criteria, Massachusetts will compete for the ACHA and Penn State will not.

It's not sports-rule airtight, but one life rule was subsequently applied by the Lady Icers: keep kicking through adversity and good things generally happen. The reaction served the team well though a sweep of Vermont February 18th and 19th that clinched the ECWHL regular season title with a 7-2-1 record. It also served them well through the league's tournament on Saturday and Sunday, beginning with Saturday's semifinal against that same Massachusetts team that unjustly holds the last bid to ACHAs.

Despite being shorthanded for 30 percent of the first period with no power play time, PSU outshot UMass 10-9. They almost escaped to the dressing room unscathed, but the Jaramillo sisters - the ACHA's answer to the Lamoureux sisters, I suppose - teamed up for the game's first goal. Raschelle from Chelsea made it 1-0 Massachusetts after 1, although more than anything, it made the Lady Icers' big scoring line mad. Jess Desorcie tied the game up just 18 seconds into the second, assisted by Taylor Gross. Desorcie then returned the favor by setting up Gross for a 2-1 PSU lead 5:17 after that.

Sarah Oteri, who scored three of the four UMass goals during a series between the teams February 10th and 11th, leveled things once again early in the third period. A problem for some, but only if you don't have Big Game Tess Weaver on your team. As she so often does, Weaver scored the decider on an assist from Gross with 4:36 remaining. It was Weaver's fourth game winner of the season, a number that also includes the triumph over NCAA Division I Sacred Heart and a win at then-top ranked Northeastern in January.

However life, and adversity, crept back into sports and hit the Lady Icers - hard - two more times. Senior captain Sara Chroman broke her ankle late in the second period of the game - an unfortunate conclusion to a great run as the epitome of "outstanding student-athlete." The uncertainty and injustice of life may be a theme of this post, but I still have every confidence that the real world will nevertheless treat Chroman extremely well. She's certainly earned it. Jess Desorcie, who scored 19 (!) goals this semester after coming over from NCAA Division III Connecticut College, also suffered her own ankle injury in the first period of the ECWHL championship game against Rhode Island and was lost for the duration. She, however, will be back, presumably in a key role on Penn State's inaugural NCAA team.

Without two vital players, the slim hopes of defeating a tough Rhode Island team were not realized, as the Lady Icers fell 4-1 to end the season 13-14-3-1 and 12-7-1-0 in the ACHA, along with the ECWHL regular season championship. There's really no point in reliving the final, but it's worth observing that the lone PSU goal was scored by Elizabeth Denis, the geoscience Ph.D. student and former Brown player, who jumped on the top line in Desorcie's place. She's a great story if you're not familiar, and while NCAA rules prohibit her from being a part of the varsity team next year, I hope to be able to follow her with the new incarnation of the women's club program.

For the time being though, it's on to an offseason that's sure to be full of intrigue. In 2012-2013, Penn State will dive headfirst into a College Hockey America that includes Mercyhurst, one of the nation's best programs, as well as quickly-rising Robert Morris and old ACHA rival Lindenwood. And from what I understand, both the CHA and NCAA championships are won on the ice (it doesn't get much more objective than PWR and autobids, does it?). I, for one, can't wait.
Posted by Kyle Rossi at 4:17 PM