Yeah "Penn State Holds NCAA Attendance Mark" kind of caught my attention when this one came across.


In its first year as an NCAA program, Penn State actually set the mark for the highest-percentage of seats filled. Before moving over to the state-of-the-art 6,000-seat Pegula Ice Arena (above) next season, the Nittany Lions call Greenberg Ice Pavilion and its 1,400-seat capacity home. Despite the seating limitations, Penn State sold out every home game and averaged over 120% attendance.

In the NCAA records, PSU is given nine home games - two against AIC, Air Force and Alabama-Huntsville, and one against Buffalo State, Neumann and Robert Morris. Seven of the nine ended up as Ice Pavilion sellouts of 1,300 in a building that never has the same capacity listed in two different places. The Tuesday night Neumann game was just under a sellout at 1,071. The last one? The 5,389-person crowd in Wilkes-Barre against AIC on October 13th. Divide something like that against the Ice Pavilion's capacity (instead of counting Wilkes-Barre's 8,050 capacity for hockey for that game), and you end up with 128.1 percent capacity over the season.

There are plenty of reasons to be excited about the potential fan base for PSU hockey - that Wilkes-Barre game, as well as those in Hershey, Philadelphia and Pittsburgh chief among them. It seems kind of silly to pump ourselves over something like a falsely-calculated "attendance mark."

2. TMQ: Assessing the candidates for coach of the year
(USCHO)

Guy Gadowsky's name comes up in this coach-of-the-year discussion - then is fairly quickly dismissed for vague reasons ("I don't know if it'll gain a lot of traction"). Why? Find me one person who, before the season started, thought Penn State would even be competitive with major-conference programs - I'm an unapologetic homer, and I didn't think that - let alone actually beat four of them. With all due respect to guys like Rand Pecknold and Bob Motzko, who have done amazing things this season, there's really no argument in my mind. People thought Penn State would be a whipping boy for years, perhaps forever. Penn State surged well past "whipping boy" in its first year.

2014 commit Bo Pellah doesn't know Bill Murray. But is really into Taylor Swift. If I didn't secretly (not anymore, eh?) plow through two TayTay albums on every single road trip, I'd say something about how horrible that is. Regardless, a quick and highly entertaining interview - I always love anything that shakes players out of the hockeybot mindset in public. 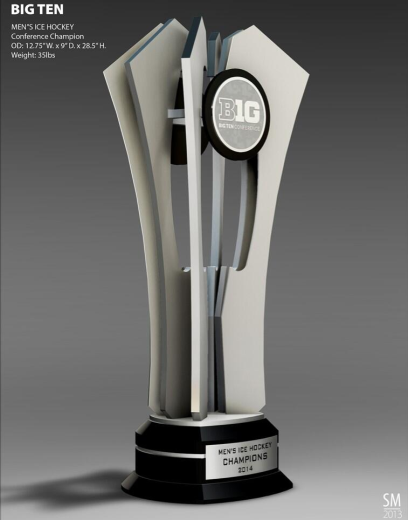 Hey look, you guys - Big Ten championship trophy. The conference isn't noted for commissioning quality designs, but I really like this one, as it looks like a bunch of skate blades and a puck. Kinda. Well done. Also, according to a photo tossed on Facebook by UNO message board MavPuck.com, we may have a Big Ten Tournament logo as well. Good times. 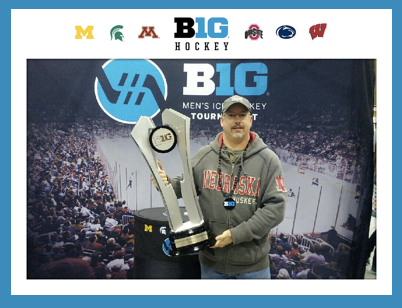 Allow me to be the last to tell you that legendary Boston University coach Jack Parker is retiring at the end of the year after 40 seasons, 894 wins (and still counting for now), three national championships, boatloads of NHLers (including Mike Grier, a nephew of PSU football legend Rosey Grier) and a bunch of other impressiveness. When I first got into college hockey, BU was my favorite NCAA program, and while it probably wasn't any longer by September 16, 2010 (the last day before PSU was in that category), I've always generally rooted for the Terriers except against a handful of schools, with Parker being a huge reason why.

There's been a lot written about Parker's "complicated" legacy in light of the last couple of years of off-ice issues. Kind of reminds me of another coach, different sport, more familiar to readers of a Penn State blog. I believe history, ultimately, will be kind to both, but we'll see.

Going to go take a shower after linking something written by Ryan Lambert. Be right back.

First off, congratulations to Minot State on the ACHA Division 1 title, as they beat Lindenwood 9-5 in the championship game in Bensenville, IL on Wednesday. The Beavers had developed a reputation as tournament flameout kings over the years, but I like their program, so I'm happy to see that one buried. Second off, "octant?" Never change, ACHA.

The three ACHA opponents of Penn State (Arizona State, Oklahoma and Ohio) all saw their seasons end in disappointment at nationals, with the eventual champs taking out both the Sooners (in overtime in the quarterfinals) and the Bobcats (in the semifinals). ASU fell to Lindenwood in the other semifinal. A team that beat Penn State this year wasn't even the second-best team in the ACHA, as things turned out. ACHA hockey is good hockey, people.

The NCAA Division III opponents of the Nittany Lions are also done with their seasons, by the way. Buffalo State wound up 13-12-2 overall with a loss to Oswego in the SUNYAC semifinals. Fredonia was 7-16-3 overall and lost to the Bengals in the SUNYAC quarterfinals (the two teams finished fourth and fifth, respectively, in the league standings). Neumann was the best of the three at 19-6-3. The Knights won the ECAC West tournament with a 3-0 victory over Manhattanville but missed out on an NCAA tournament at-large bid, becoming one of those rare teams to end their season with a win.

Meanwhile, on the women's side, congratulations to Mercyhurst, which recovered from last season's blip (a tournament championship game loss to Robert Morris) to continue their quest to win everything ever in the CHA. MU topped Syracuse in the final on Saturday, after the Orange took out RIT (which ended Penn State's season, of course) 2-1 in overtime in the semifinals. Mercyhurst beat Robert Morris 2-1 in the other semifinal.

The Lakers were also the only one of Penn State's opponents this season to earn a bid to the NCAA tournament, and they'll open with Cornell on Saturday.

A couple of quick player profiles from the USHL franchise including one men's signee (Saar) and one women's team sibling (Mendelson). Toss in incoming RPI transfer Pat Koudys, and yeah, I'll admit that the Jacks are my favorite team in the league, at least right now.


“He had a lot of options but Ohio State was his No. 1 choice from Day One and I’m glad it worked out for both sides.”

PS. I picked the one article I found about it that didn't use the word "delivers" in some way. You're welcome.

Remember when Alabama-Huntsville played at the Ice Pavilion a month ago and head coach Kurt Kleinendorst let it slip that the Chargers were returning next year in one of his postgamers? Looks like that's off, thanks (probably) to the fact that the WCHA was able to accommodate the no-longer-independent school with a full conference schedule a year earlier than planned.

Speaking of UAH, March 5th was the 30th anniversary of an epic national club championship game between the Chargers and Penn State. Here's a fantastic look at it from the FoTYT down south including, for the first time that I've seen, a full box score of the game.

Ice Zone to close for good May 15
(Youngstown Vindicator)

This news is a couple weeks old, but the Ice Zone in Boardman, OH, the site of the 2006 ACHA D1 Showcase and 2007 national championships, is closing in May. For whatever it may be worth, it hosted the Icers' last-ever ACHA championship game appearance, which capped a run of ten in a row as well. Somewhere, former Oakland forward Will McMahon, who scored four times and added an assist in the Grizzlies' 5-1 win over the Icers in that title game, is crying.


And finally... here, once more, are your ACHA Women's Division 2 national runners-up. Thanks again for the ride, guys.