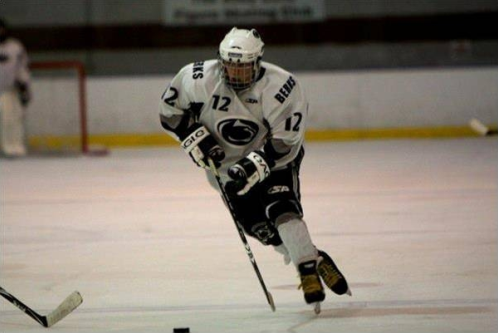 Last Monday, with the ACHA D2 regional tournaments completed, the Ice Lions learned their Pool C rivals for the upcoming ACHA championship tournament - Marist (No. 1 in the Northeast Region), Illinois State (No. 3. in the Central Region) and Weber State (No. 4 in the West Region).

In true ACHA style, I can't tell you precisely when Penn State will play each of those teams just yet, although we do know that the games will be on March 15th, 16th and 17th at the Hardee's IcePlex in Chesterfield, MO. Should PSU win the group, they'll advance to the semifinals on the 18th against the Pool A winner (Grand Valley State, Arizona State, Northeastern, Maryland), then hopefully to the finals on the 19th.

On February 21st, in a Commonwealth Campus season wrap-up post, I mentioned that Berks senior Sean Sowney became the fourth player in program history to hit the 100-point mark for his career. Well, take that one step further: Sowney finished with 111 points to end as Berks' all-time leading scorer, with the record-breaking point coming on the final shift of his career to cap a four-point night.


“It’s a great feeling knowing of all of the people who went to this school you are the only one to ever do this,” Sowney said. “The record may be broken but at the time when I left, I was the leading scorer.”

“I know if I had an extra year I could have put that record out of reach.” Sowney said.

Whether the record falls next season or not, Sowney’s living in the present.

“This is one of those achievements where you realize everything you you’ve done in your career, it’s all came together. It’s an awesome feeling.” Sowney said.

A great story, and certainly worthy of the lengthy write-up it received - as well as first-star status. 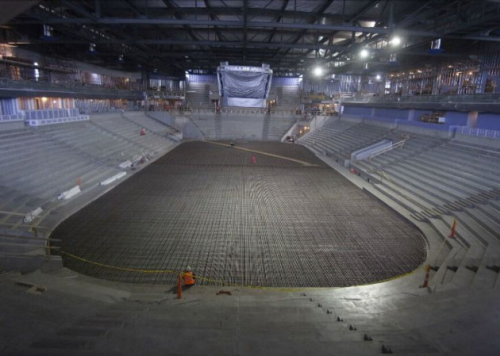 The major story here is the pouring of the concrete that will sit underneath the Pegula Ice Arena's playing surface, but to be honest, I'm more impressed with the general aesthetic here. I mean, look at it - beyond the installation of the ice and seats, a couple (much) smaller things, and a bunch of stuff you can't see in the photo, that's your home arena. Not too bad.

RIT is a great addition to a new division
(USCHO)

Too soon? Yeah, probably. But nevertheless, it's a great in-depth look at the Tigers and what has to be called a highly-successful first DI season in Henrietta, NY - I watched RIT's first DI game against Mercyhurst on September 28th where they went down 2-0 18 seconds in, and I've seen their most recent work, against Penn State of course. Not really much of a comparison. Tons of credit is due head coach Scott McDonald, his staff, and a group of senior leaders with that championship mentality for their getting up to speed quickly.

Here's one more look at the third consecutive Minnesota title won by Laura Bowman and Amy Petersen - soon to be called incoming PSU freshmen - and their teammates. If you hadn't already figured it out, it looks like we're in for some freaky Sedin twin-like ESP stuff with the best friends. This passage concerns Bowman's clinching goal in the state championship game:


Petersen and Bowman put the game away at the 3:04 mark of the final period. Carrying the puck into the offensive zone on a 2-on-1, Bowman slowed the play, passing across to Petersen, who returned the favor for a tap-in goal for Bowman.

"Amy and I have played together for 11 years and we just have amazing chemistry. I was impressed with our play," laughed Bowman, who added three assists in the tournament. "We were talking about how pretty it was when we were screaming. We knew it was pretty."

Since bailing on his Penn State commitment for the defense-optional QMJHL, Conor Garland has done fairly well, with 17 points in 19 games. And he's starting to generate some buzz ahead of the 2014 NHL Entry Draft in spite of his elfin stature. No, I don't really care, and you probably shouldn't either, but I guess it's sort of my job to point things like this out, and I neglected to delete his Google Alert, so...

Depressing? Hilarious? Awesome? Guess that sort of depends on your favorite sport and your outlook on life. Personally, I don't think it's a violation of #OneTeaminess to acknowledge that Penn State men's basketball hasn't been a highly-successful program, for the most part, and will often be on the ouch side of oddities like this. And hockey winning at Wisconsin in year one of the NCAA era was awesome. So that's where I am with it.

While on the surface, this article is no different from the glut of shallow pieces generated by Guy Gadowsky's end-of-season press conference - new arena coming, surprisingly good team, everyone's happy and excited, if you missed them -respect coming from Minnesota is a little different.


Coached by Guy Gadowsky, who produced success first at Alaska and then at Princeton before landing the coveted job in State College, the Lions finished the season with a respectable 13-14-0 record, which included wins over Michigan State, Ohio State and the Badgers.

It also included a bewildering loss to Arizona State's club team, but such are the growing pains to be expected in a hockey program that had zero seniors and was started from scratch two years ago.

Gadowsky took a few players off the Lions' club team, recruited heavily in the growing hockey communities in Pittsburgh and Philadelphia, and got a few transfers, including ex-Gopher Max Gardiner, from Minnetonka.

"It wasn't like they were starting a new program. They had a nucleus of players on campus, and they were able to get some transfers in which helps when you're building your program," Gophers coach Don Lucia said. "I think they're going to walk in in a good spot. They had a good year this year, and obviously, it was a big win (at Wisconsin)."

"Started from scratch?" Kind of a baffling way to put it, especially given that it's almost immediately contradicted by Don Lucia. I've written about it before, but you simply can't separate the Icers from what happened this season, end of story. I'll take it a step further and say that the loss to Arizona State was less about "growing pains" and more about the quality of the ACHA that helped launch PSU's NCAA program (certainly, both played some role - ASU wouldn't be able to do that to a Boston College).

Yep, I'm playing ACHA hero again. Someone at Penn State has to do it.
Posted by Kyle Rossi at 3:03 AM