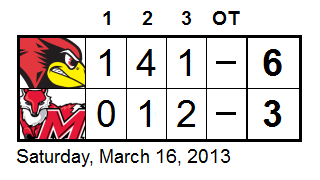 While the Ice Lions staved off elimination with a big 7-3 come-from-behind win over Weber State Saturday afternoon, they were hurt by Pool C's other result, which saw Illinois State complete a sweep of the group's top two seeds with a 6-3 win over now-eliminated Marist.

Had Marist won, each Pool C team would have been 1-1-0 entering the final day of the round robin Sunday, obviously setting up a wide-open situation that may have proven advantageous to a PSU team trying to claw back from an opening loss to the Redbirds. As things stand though, ISU is 2-0-0 and also owns a sizable advantage in the goals against tiebreaker. Essentially, Penn State's best hope is a win over Marist tomorrow morning at 11:30 a.m., coupled with a Weber State win over Illinois State in a game beginning at 11:00 a.m. Additionally, PSU will need to allow at least four fewer goals than ISU over the course of those two games.

It's a longshot, but an explosive WSU team can score in bunches, while Marist has only pride left as motivation. It may not be enough at this point, but it's something. And hey, it beats the only alternative that was on the table after day one.