A redemption-driven Ice Lions squad that fell just short during an otherwise spectacular 2011-2012 will now try to close this season on a five-game winning streak and a title at the 2013 ACHA Division 2 National Championships, running Friday through Tuesday at the Hardee's IcePlex in Chesterfield, MO.

Penn State, despite going to the 1997 title game and having several other tournament appearances to its credit, has never won an ACHA D2 championship. Last year's 29-3-0 outfit, coached by Josh Hand, looked primed to deliver one until seeing its season end with a loss (snapping a 24-game winning streak) to Grand Valley State in the final game of pool play in Fort Myers, FL. While that group did see a few senior departures - captain Jim Recupero and star goalie Tom Badali to name a couple - much of the team's core returned this year to try again. Under new coach Matt Morrow, the Ice Lions went 25-5-1 and won the MACHA regular season crown, but saw a 16-game winning streak snapped with a 3-2 loss to Virginia Tech in the league tournament's championship game.

For those who don't know, the 16-team tournament is divided into four pools of four teams. Each pool contains one team from each of D2's four regions. Here's how they'll be grouped, including their regional designation (W = West, C = Central, NE = Northeast, SE = Southeast) and rank within that region. The top two teams in each region (based on polls) earned autobids to the tournament, while the other two had to navigate tournaments involving the teams ranked third through tenth in each region on February 23rd and 24th to qualify.

Following a set of round-robin games that begin Friday and conclude Sunday, each pool winner will advance to the semifinals on Monday and (if they win there) the championship game on Tuesday. Here's a quick look at the teams PSU will need to beat to make it through the weekend. 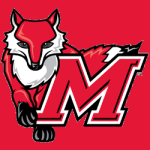 Pool C's top seed, Marist, is surprisingly not considered by most to be one of the leading national championship favorites. Grand Valley State, Miami and Michigan State, among a couple others, are all receiving more advance hype, thanks in part to the Red Foxes' reputation as tournament chokers and the fact that it's their first-ever appearance at the biggest tournament in ACHA D2. So I suppose it can be said that PSU received a solid draw into a more wide-open pool than last year, when the Ice Lions were stuck with GVSU, then the defending national champs.

Still, the Red Foxes have earned the right to be called a top team, thanks to their winning the regular-season title of the always-brutal Super East Collegiate Hockey League, which includes fellow nationals team New Hampshire as well as annual contenders like Siena, William Paterson (which went on to win the SECHL tournament for a fourth straight year) and New York University.

The team is fueled by four 20-goal scorers, including Chris Cerbino, Mike Chiacchia, Patrick Erstling and Steve Milanesi, and their reliance on those guys to win games has often resulted in Marist's involvement in high scoring games - the Red Foxes score more than 5.5 times per game on average, yet don't have a goalie that has a goals against average under 3.5, with Zach Gomiela leading a three-headed monster in net.

The Redbirds, interestingly enough, join Marist as the only teams making their first nationals appearance in the entire field, a reality that might play well for a more seasoned PSU squad. ISU earned their way in following a stirring 3-2 win over powerful Lindenwood at the Central Region tournament thanks to Carter Kernbauer's third-period takeaway-and-bury winner.

Climbing past that threshold for the first time ever was just the most recent in a string of accomplishments that has seen Illinois State take the regular season title in the Mid-America Collegiate Hockey Association's (not to be confused with Penn State's Mid-Atlantic MACHA) Gold Division, although they fell short in the league playoffs before recovering for regionals. With a robust schedule that includes a season-opening sweep of nationals participant Saint Louis and wins over strong teams like SIU-Edwardsville, DePaul, Missouri, and of course, Lindenwood, it's easy to see how the Redbirds may be a dark horse candidate to emerge from the pool.

Solid goalies Ryan Siuzdak and Scott Czarnik sit at the back of a very balanced team that, in addition to Kernbauer, can roll six other 15-goal scorers. Eric Brown, Brian Reimel and Josh Ambrosat are among this group. Former NAHLer Ryan Dunne is not, which tells you something about their depth.

The Wildcats come in as decided underdogs in Pool C given the balanced strength in the other three teams, although they're more than capable of playing spoiler - witness a road win and tie against tournament team Colorado State back in November that stands out as WSU's regular season highlight.

WSU, which once famously boasted Aaron Dufford - PSU legend John's great grandson - on their roster, struggled mightily with West top seed Utah State, to the tune of an 0-5-0 record in the season series, including 10-1 and 8-2 decisions. Sure, USU is one of a handful of the top national championship contenders, but then again, this is the national championship tournament and the Wildcats are going to have to play and beat teams of that caliber to be successful. In Weber's defense, they did have to take out a tough Utah team at regionals to earn their bid after splitting a regular season series with the Utes.

Count on Dax Hobbs (47 goals - the most in D2 - and 74 points) to do a disproportionate amount of the team's scoring, although things drop off rather quickly after Hobbs, Braxton Green (36 goals, 72 points), Jeremiah Holmes (25 goals, 63 points) and Josh Giudice (21 goals, 33 points). Ian Franke and Craig Peterson both play significantly and capably in goal, while Jacob Holmes and his team-high plus-57 rating will regulate things from the blue line.

Pool A: Pool A is of special interest to the Ice Lions because, should Penn State advance out of the group stage, the Ice Lions will play its winner in the semifinals. The obvious headliner is Grand Valley State, the 2011 national champs who, as mentioned, eliminated PSU last season before losing to Florida Gulf Coast in the title game. While the Lakers are heavy favorites to emerge from the group, second seed Arizona State has proven their worth through an extremely dense schedule, particularly for a western team. The Sun Devils bombed Weber State twice back in December, went 4-0-4 against a very good Northern Arizona team, and played two tight losses against national title contender Utah State.


Pool B: Miami, which thumped the Ice Lions 7-3 at the ACHA Showcase on October 6th in PSU's only game against another tournament team, leads what most consider the tournament's strongest pool - Sunday's possible semifinalist-determining game between MU and Michigan State is expected to be one of the best games of nationals, pitting two of the four national championship winning programs (Miami in 2000, MSU in 2005 and 2007) in St. Louis against each other. Still, don't count out Connecticut, in spite of their low seed. The Huskies have three upperclass forwards, Paul Cinquegrana, Rui Encarnacao and Miles Winter, who have played a combined 110 games with the school's NCAA team, and with more success than the typical NCAA-to-ACHA player. Winter had 36 points in 66 career NCAA games, while Encarnacao had 22 in 44.

Pool D: This will be still another top-heavy pool, paced by Utah State and New Hampshire. Both of those teams know where the net is located - the always-potent Aggies, featuring Brian Gibbons, D2's leading scorer last year, pot 5.5 goals per game, while UNH is even better at 5.64 per contest. Their matchup, scheduled for Sunday afternoon at 4:30 p.m., will join that Miami-Michigan State game to be arguably the two marquee contests of the group stage. As in Pool B, lower seeds Bowling Green and Saint Louis have an extremely difficult road to the semifinals, but the Billikens, coached by former NHLer Todd Ewen, should be a tough out.

All games available on FastHockey.com ($)