Here's a timely reminder of the fact that tournament passes for the first Big Ten men's hockey tournament, at St. Paul, MN's Xcel Energy Center March 20-22, 2014, go on sale today at 11:00 a.m. The tickets are available through Ticketmaster and range from $80-$160 (for five games). All six conference schools will participate, so if you're a Penn Stater, please buy 'em up so that there are at least ten non-Minnesota fans in the arena.

Keep writing about the Women's Ice Hockey Club and I'll keep putting them right here. Or in the first spot. Good to see publications with more than 50 views per article like the Collegian and Onward State give the ladies some well-deserved pub.

Kinda had to be this, didn't it?

I admittedly dropped coverage of the ACHA Division 2 National Tournament after the Ice Lions were eliminated in the group stage, but just to complete the picture...

Michigan State, along with fellow Great Midwest Hockey League (GMHL) member Grand Valley State, finished with their best performance to once more sit on top of the 181 team Division.

The Spartans, who previously claimed titles in 2005 and 2007, defeated Utah State 6-2 in one semifinal, while GVSU took down Illinois State - which won Penn State's Pool C to earn advancement - 1-0 in the other.

Speaking of ACHA nationals, DVDs of each game from the WIHC's second-place finish (as well as of the Ice Lions' three round robin games) are available through FastHockey.com. The price is a bit steep at $19.00 per game, unless considering the entertainment value. Two weeks removed from the emotion of the moment, I still consider the tournament to easily be one of the five greatest things I've witnessed involving Penn State hockey.

I can't lie: After the latest batch of shamelessness from the butthurt set - "Big Ten sucks" chants and "B1G MISTAKE" banners at the WCHA Final Five (won by future Big Ten school Wisconsin over the weekend, by the way) - I'm done. Done what, you ask? Done pretending like I care about any of this supposed destruction of college hockey Penn State brought about.

Well, okay, if you're associated with a program in the "new" WCHA after being in a major conference during 2012-2013, I do sincerely feel for you. If you're a North Dakota fan who cried endlessly about the horrible Big Ten while your school was working on forming its cash grab attempt of a conference with hand-picked opponents - what really destroyed the WCHA and the Final Five as we knew it, by the way, because...STAY AWAY BEMIDJI, YOU AREN'T COMMITTED ENOUGH TO HOCKEY - then you're a giant hypocrite and deserve no sympathy.

Okay, that was almost entirely tangental to the actual article, but oh well. 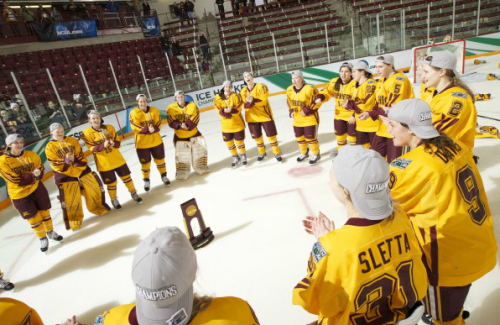 Congratulations to Minnesota, which won the NCAA Division I women's championship to cap an incredible 41-0-0 season. In the title game Sunday, the Gophs defeated Boston University - PSU assistant Gina Kearns' alma mater - 6-3. Previous to that, BU earned its way to the final with a 4-1 win over CHA champion Mercyhurst on Friday, while Minnesota beat Boston College 3-2 in overtime in the other semifinal.

The Gophers' NCAA Division I win also completes a sweep of DI collegiate hockey, as Minnesota's ACHA women's team won its national championship on March 10th, with a 2-0 result against Liberty.

The RIT women, who arguably became Penn State's biggest rival during the inaugural NCAA season, will play Clarkson in the not-nearly-as-novel-as-it-used-to-be doubleheader, while the men will battle Niagara.

It's worth noting that the AHL's Rochester Americans will also participate in what will be a ten-day celebration of hockey in Western-Central New York, which of course ties Terry Pegula to the whole thing.

Just to get this out of the way up front, no, a moving company is not the definitive word on the best hockey cities in the United States. But still, five were named. Pittsburgh and Philadelphia were two of them. And the blurbs under both of PA's major cities mentioned Penn State as part of the reason they made the list. I don't care if a moving company, Pitbull or the United States Department of Housing and Urban Development made the list, I'm still going to be impressed by that.